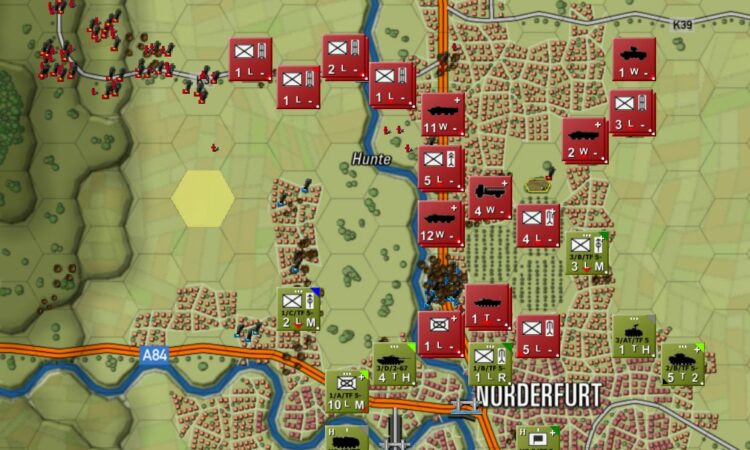 There are some games that hang with you. You get an urge to explore an era and always go back to that same title. It becomes like an old jacket on a crisp fall morning. It feels right. It feels good. Flashpoint Campaigns Red Storm has become that game for me, and seeing as I reviewed it years ago, it’s time for another go.

Flashpoint Campaign : Red Storm (FPC:RS, or FRS) is an orders based WEGO hybrid wargame set in the Cold War. This is the Fulda Gap as everyone expected it to be. Intense. Concentrated. Violent. Losses are not measured in vehicles per day, but vehicles per hour. The NATO forces in Fulda are a speed bump to blunt the blow from the Warsaw Pact. You are that speed bump (or the freight train).

The most interesting thing in FRS is the orders system. This is not a Tiller/WDS game where each hex is moved into like a board game. You have a few waypoints, and a few different movement methods, but depending on the intensity of Electronic Warfare, distance from the HQ, or even whether or not it is still alive, will impact how quickly the unit actually performs those orders.

The tension from this method is amazing as you watch slow motion train wrecks occur across the battlefield while trying to mitigate the terrible outcomes. It feels real, it feels exciting, it feels intense.

At one time I had a complaint about very large scenarios. A full armored divisions worth of units is a lot of clicks. It is still a large load but, if you use the orders system, it becomes an exercise in task management and not micromanagement. For most units it’s a “set and forget” order where others, those at the tip of the spear, see much more attention.

Contrast this with a standard turn based game and the work load is significantly reduced. Would it be nice to have formation orders? Yes, but compared to the massive scenarios in say WDS’s Stalingrad, this is a piece of cake. The sequel, Southern Storm, comes with a “group move” function that will take care of this.

So lets bust this down a bit. Without seeing it in action you might assume each order occurs immediately. First off different nations will react quicker, or slower, just because of doctrine and training. Warsaw Pact forces tended to adhere to rigid plans with little input for lower level variation whereas the NATO defenders had to react quickly, otherwise they’d be swamped.

So you issue orders, but, as the Warsaw Pact player, you have to wait 30 minutes at the start of the scenario. (It may be more, or less, this is just an example). Once the scenario starts moving you can only sit and watch as your units move into position. Suddenly a platoon of Abrams turns into a company of Abrams on your flank. And it’s only 12 minutes into the scenario.

On the flip side that NATO command is at 14 minutes. Halfway through the Warsaw Pact players turn he can react, his OODA loop is shorter, he diverts advancing units and strikes the clumsier (but more powerful) WP player. So now the NATO player issues orders twice for the single time the WP player can.

But then the WP player gets intel on the location of the NATO HQ and absolutely dumps it with artillery. The chain of command is wrecked, orders are disrupted, and now that 14 minutes might turn into 25 minutes.

There is also a mode that limits how many orders your staff can give. Want to micromanage every single unit? Sorry, best plan for the critical ones. I find this enjoyable on smaller scenarios but on big ones it can become easy to get overwhelmed and lose track of the sense of things. It’s the masochist mode for sure.

Traffic. See that blob of NATO units on the highway? That is a traffic jam and the Pact player hammered it with artillery a few minutes later. My mechanized infantry suffered punishing losses as everyone was piled up in one chokepoint. See how the WP forces are moving wide, not long? As like everything, it’s juggling between speed and protection.

One excellent example of the delay is above. I have a platoon of Cav Scouts far ahead to screen a valley. Suddenly an alert comes in about a detected enemy HQ on the other side of the hill, so I send orders to the Cav Scouts and they won’t start moving for nearly an hour. Being out of HQ range comes with its own dangers.

The reaction to threats, and opportunities, creates the most interesting narratives. In those terrible few minutes you have to decide if you should hold, or relocate now to prevent that artillery from raining down on you. And you think, “but it’s a solid position!”. Some scenarios give you room for this to play out, others are nothing but a last stand where tomorrow is damned and all positions must be held for today.

The Campaign mode provides an interesting way to force you to think about tomorrow. VP’s are used as currency to replenish your units, and time allows them to rest. Do you fight now, or wait to let them rest but it may be dark? As each scenario comes you have to decide which objectives are worth pursuing, and which are too costly. I’d have loved to seen more to this mode and am hopeful that it will be expanded upon in the Southern Storm.

What would this game look like, but with WW1 battles? Arras, Verdun, Somme, Passchendale? The same command difficulties arise, but worse. Or Vietnam, patrols on a massive map chasing units that react quicker than the US Forces?

At a certain point smaller battles are just locked in. The tug and pull of combat gets so close it can be difficult to disengage. But does that mean I waited too long to relocate? In some scenarios there is only a couple of Victory Points. So it forces an “all or nothing” battle. Ideally there would be a range of VP locations to give you the opportunity to relocate and have some breathing room.

Nice features would include an external log of what occurred for those nerds who wish to dig into the specifics. A map maker that doesn’t involve an Open Source GIS solution would also be exceptional.

All in all FCP:RS is a great game thematically, technically, and narratively. It is, and still remains, a wargaming classic. Southern Storm should be great, but for now you can’t go wrong with FCP:RS.

Get it at Matrix, or on Steam.