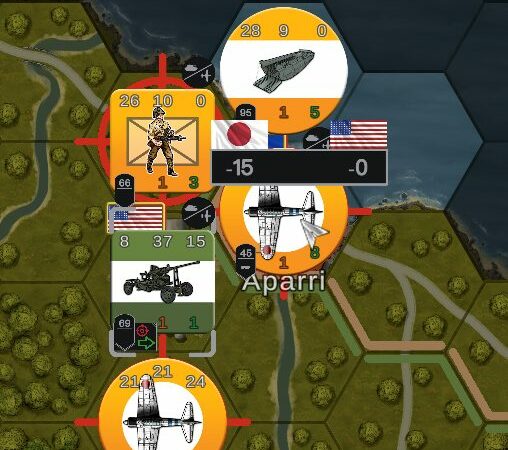 The scope ranges from theater, continent, and regional conflict. Units occupy a single hex with support occurring from neighboring units. Air units also occupy a single hex but on a different Z level. It is an odd abstraction to have an Infantry division occupy the same quantity of hex space as an AA Flak cannon or anti-tank gun. It works, but puts it squarely into the Panzer Corp/General style of combat.

Scale ranges from singular infantry units to armor. Armor and non-infantry units are not divisional but a literal single type such as Pz IV or 88mm Flak Cannon for example.

You play as a supreme commander of your forces. Allied units operate independently, you may assign them reinforcements.

The maps are fairly basic but the unit art is fairly well done. At a higher zoom level the text on the units became blurred and difficult to read though a quick zoom in was enough to clear it up.

The game focuses on the long burn where a scenario must be played to completion over 30 or more turns. It is a game to be savored in long stretches as you build up your units into experienced forces complete with heroes and all. Someone looking for a quick scenario or one-two punch, Unity of Command like, should look elsewhere.

You operate units in a IGOUGO system with support units occupying the same space as divisional infantry forces. Placement of units and the order in which they are played impacts the combat results. Supply, reinforcements, and fuel, are all present in the game. Scenarios are historical to a certain degree but this is not a Grigsby, ToaWIV, or Tiller title with lovingly crafted OOB’s.

The game represents units engaging in combat on a Brigade-Divisional level. Support assets are present and occupy the same space as the primary combat units. Placement of these support assets is critical in order to assist units. Research and production is also represented but on a per-equipment basis and not Army Group or composition.

The game has combat units represented by the primary combat unit, so for example an armored unit is represented as, and purchased as, a Panzer IV. It is not an entire armored division with a mixed OOB. An anti-tank gun, even if it would only be a company level asset, occupies the same physical game space as an armored division or infantry division.

The system is transparent. You will know, fog of war excepting, exactly how your combat will progress. The game itself is mechanically easy to play. Your options are movement, attack, and some supply actions that replenish your units or reinforce them. In this the game works well, you can absolutely slog about Poland without much difficulty or menu digging.

The designer has focused on making a representation of games like Panzer Corp or Panzer General and not a historical piece such as a Grigsby or Tiller game. It is in broad brush strokes that one invades Poland or Russia, not in fine details of trucks per division or how many MG42’s are in that lead unit. In this it succeeds as it doesn’t try to fit itself into a historical shoe.

The game would be worse off if they tried to make it an exact representation of history. Seeing it in a lens of the real situation is troublesome as the game doesn’t have it as a goal, it’s searching for the nostalgia in reality, not the reality itself.

The game is fairly derivative of past works. One interesting contribution is the simplicity, functional UI, and rapid development. The developer has a staunch NO DLC stance that is refreshing from the world of conveyor line DLC’s as a profit model. The editor side of things is functional and if you can deal with the abstractions the game makes then you can create a wide range of scenarios.

In addition to a fully fledged editor is scenarios ranging from Britain in Africa, the US in Philippines to the Continuation War. There is a surprising variety of campaigns as well as a random mode that is fairly unique to the genre.

You play as both combat commander, production/research supervisor, and logistical button pusher. Logistics is quick, but at times feels tedious. The production is interesting but it can be a bit jarring to see a combat effective Panzer I in a time where it should be long retired.

You will focus on moving units into combat positions, including the best placement of support and artillery as well as air units. The order of your combat, for example artillery first, then air units, then a push to open a thrust, will significantly change the path of advance. This flexibility makes it much more than just a units smashing into each other game and makes for some interesting advances.

Beyond this you will need to capture VP hexes for production points. These points not only refit and replenish your units but also bring about new units. Research brings about new units as the game goes on, but I found this to be a les interesting part for me.

The long play of the game is interesting as most scenarios focus on 30 or more turns to advance to your objectives. A lightning smash or sudden strike is just one play in a long series required for a win. This is not the quick handful of turns like Unity of Command.

Order of combat has the greatest impact on decision making. Mechanically it is easy to move an attack forward, it’s a bit more difficult to see the best path that uses your strengths against the opponents weaknesses. Plotting future movement against the demands of replenishment with an eye on additional production makes for some unique gameplay.

Overall I found it to be a wargame-lite style game. It plays quickly, is a beer-and-pretzels style of game. The production decisions were interesting but felt a-historical, but given the context of a lighter game I think that’s fine. The long play of the scenarios felt, well, long. This isn’t a fault, but be prepared for what may be a slog. Juggling unit placement along with prioritizing production made for some thought, but overall the experience was a bit bland.

The game works as a simple wargame experience.

It is a good game if you are looking for a less dense war game that is still hex and counter. The AI is tough, the combat is transparent in a good way, and you’ll find yourself waiting for that one hole to just open up! But of course it doesn’t.

The game an independent studio feel to it. It’s not that the edges are rough, but there’s a touch of jank. Art work is actually pretty good if you zoom in enough, though I rarely found myself playing that zoomed in.

It is fairly remarkable that the dev made this game as his first game dev project. This really bears saying, this is his freshman effort, the opening kick, a game with multiplayer, a functional AI, decent artwork, cross platform play, and not a lot of bullshit. This bodes well for his future works.

Beer and pretzel crowd that wants slightly more than a basic war game but not the mass of Grigsby, Tiller, or TOAW. If you are already a fan of the Panzer Corps/General type games then give it a look. It’s traditional in a way that hits the right spots.

For one big reason, the Steam version, as of September 2021, is $25. The same game (cross-platform play, right?) is $4.99 on the Apple App Store. The Steam version, in comparison to Panzer Corps 2, is at a $15 discount. But if I can play the same game on my iPad for $5, I feel a bit miffed that it’s not cheaper on Steam. Unfortunately the price anchor is no longer a competitor on the Steam marketplace but the iOS version.

Here is where it gets muddled. The developer has committed to a zero DLC policy. You get the works, editors, and the ability to build upon your scenarios. While Panzer Corps 2 base is $40, there is $54 worth of DLC.

Value can be difficult to quantify, especially in the case of different store fronts offering the same product. My recommendation is to play the (free) demo. Full stop. Seeing demos is especially heartening as they seemed to have gone out of style, it’s refreshing to see them coming back and just breeds confidence in a purchase.

Then drop $5, get it on your Apple or Android device, then if you fall in love plunk down the extra $25 for the PC version.

Find it for Android at : https://play.google.com/store/apps/details?id=com.valentinstudio.OperationCitadel&hl=en_US&gl=US