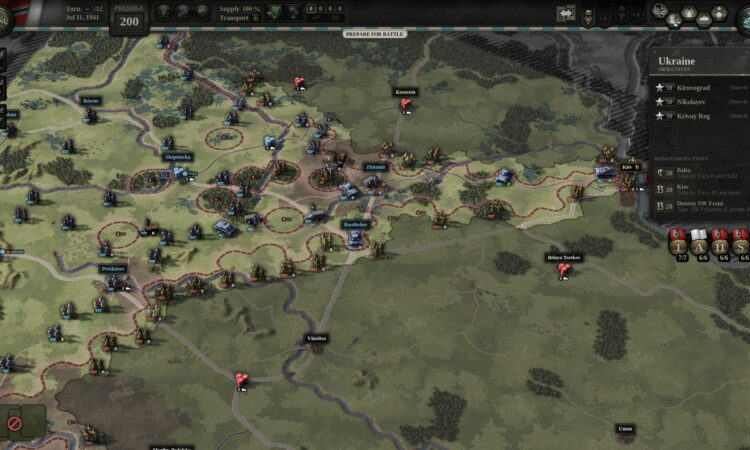 Building on the solid base of UoC2, 2×2 Games has announced a Barbarossa DLC. Slated for a Steam release sometime in April 2021. It really looks to expand upon the usual UoC maps and take advantage of the wide open spaces provided by the Soviet countryside.

But it begs the question, is UoC2 : Barbarossa a puzzle game disguised as a wargame? The first UoC absolutely had that feel, and even the 2nd to a certain degree. My hope is the wide open spaces will provide plenty of room for both the player to maneuever and also the AI. This DLC focuses strictly on the Axis side, it’ll be interesting to see how(if) they handle it as a Soviet player.

The feature list is promising. 23 scenarios across all of Russia. New unit types reflecting the variety of Axis forces. Specialty maps for Odessa and Sevastopol sound really interesting as these massive sieges tend to turn into one hex trouble spots that loses out on that flavor of the history.

They make particular mention of “Limited, but difficult to achieve, alternative historical outcomes, such as capturing Moscow in late 1941.” The more scholarship that comes out on Barbarossa the more I err on the side that Moscow was never going to fall and was an entirely impossible goal for the Axis forces. A great read on this is David Stahel’s Battle for Moscow.

Now that modern scholars have access to the Soviet archives it really adds a new layer to the research. Any book written prior to the archives being open is a one sided source that relied heavily on first person (Axis) sources. Another great resource is Wages of Destruction, this details the industrial effort and how it was doomed to fail almost from the beginning. This is more an economic text than a historical combat piece, but immensely interesting.

Judging by the screenshots it’ll be a train of linked scenarios instead of a monster Grand Campaign such as WitE2. This should make for unique enough gameplay with strict focus on a scenario and situation. This’ll be great if you’re the sort of person who loves the idea of a Grand Campaign yet never plays it. (Me!)

This is a good looking game. After staring at ToaWIV or a JTS Squad Battles title, this thing is a work of art. It just shows that good art design and a solid UI can make for an immensely satisfying game experience.

You’ll find it on Steam this April.

Next ArticleMultiplayer CMO : Shoot your friends!