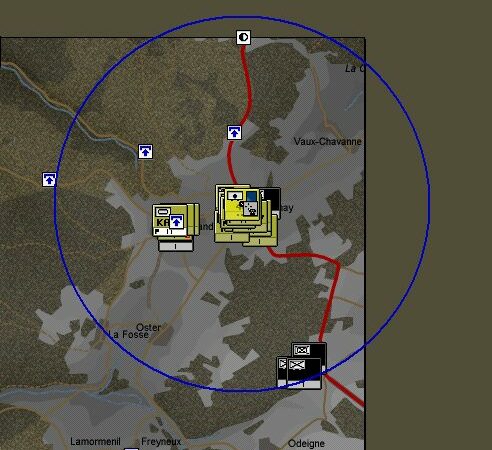 Proper use of artillery can mean the difference between a hasty retreat and a victorious advance. Do you attach it to the main command? Micro-manage and direct it yourself? Or just leave it attached as is? All situations are valid at certain times and with different play styles. So lets dig in and find out what works best.

Back to our old friend, Manhay Crossroads. We begin the scenario with two indirect fire units.

The first has a pair of 81mm mortars and 32 rounds.

The second is much more robust. In this case M7 self propelled artillery pieces. 18 of them, and over 400 rounds of 105mm ammunition. The entire Field Battery Battalion is quite a force on its own.

As it stands right now both units are “On Call”. By issuing a move order or defend order we automatically put the units on standby (once they have deployed). As requests filter through the chain of command either one of these will fire as directed by the tactical AI. But what if we want to direct it ourselves?

Press B or click the Bombard icon in the orders tab. The black ring is the minimum range and the blue ring is the maximum range. The entire map is in range, as long as the target isn’t too close.

Our mortar in comparison has a much shorter range but a minimum range that is barely 100 meters.

You can also directly attach an artillery unit to a task force by selecting it along with the other units and issuing an order. The artillery unit will then task itself exclusively for that group and will be unavailable for the tactical AI to request fire. You, the player, may still take command and direct fire.

If you are playing with orders delay (and you should be!) then artillery can be gamed. How so? You, the all seeing Divisional Command in the sky, have an unrealistic view of the battlefield. In reality you’d be listening to the radio, reading dispatches, and attempting to discern what the hell is happening. If a unit was heavily engaged they would have to call you and request a battalion fire support mission. Then, and only then, would you let those 105’s let loose.

Except here, by watching the map, you can get an early idea of trouble. So you can totally grab that 105 battery and have them direct fire before the tactical AI would normally be able to react. Personally I won’t take direct command of artillery and will only attach them to task forces or HQ’s.

This bombardment, south of Task Force Kane, has the box “Avoid Friendlies” checked. If the bombard point is too close to friendlies it will not fire and you’ll get a warning message. You can uncheck this for a DANGER CLOSE situation and potentially rain down steel onto your own troops.

Another setting is the ROF. If it is a direct order from you then the ROF is max. If the person calling for artillery is more than 3000 meters away from the target the ROF will be slow. If it is under 1000 meters and the enemy is assaulting or reorganizing it will be Max. An artillery strike on a target that is organizing for an attack is devastating and can sometimes prevent the attack from occurring at all. This is good to keep in mind when planning your own assaults, keep them out of sight of the enemy.

Once you task an artillery unit on a Bombard mission they will rest after completion and not bombard under the usual chain of command. You have to click Reattach in order to make that happen.

And yes, I’ve totally wondered why my units had no fire support while the FA Battalion was well rested.

One other setting in the Edit Task menu is Artillery Direct Spot Only. If this is checked then the artillery unit will only fire in support of the Task Force it is attached to. So for example if this FA Battalion was in support of Task Force Kane and I had that checked they would only support Kane. If this is unchecked then they may support other units that need artillery. The main advantage to checking it is Kane would always have it if he needed it otherwise some bumblehead will call down artillery on Bicycle Infantry or some such ridiculous thing.

If the artillery is attached at the highest HQ level then this setting won’t do much for you.

Here we have TF Kane. I selected all of the Task Force and shift-clicked on the 275th. Once all are selected I gave a Defend order at Grandmenil. On top of that I checked Arty Direct Spt Only. Now that FA battalion will only support Kane.

But even with 105mm artillery raining down it’s not enough to halt an advance of Panthers onto Kane who has a glorified recon squadron. It can be very frustrating to watch a unit not calling in artillery too. Typically I find it best to leave big batteries attached at the highest level and attach mortars at the lower level. The game seems to do a really good job distinguishing when to use it.

Next Article7 of the Greatest Games I Never Play