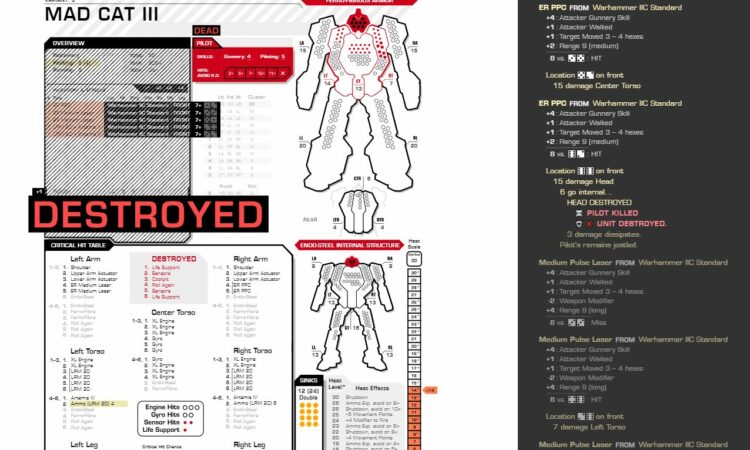 Some of my earliest gaming memories are frantically erasing paper mech sheets so I can play another round of Battletech in my grandparents basement. Following a long lapse whilst I whittled away the time in Mechwarrior Online or in the HBS Battletech game, I have finally returned to my gaming roots. Except the paper and pencil is gone and I’m printing my own mechs… Battletech is in an entirely new place and it’ll blow you away.

Battletech is a game of grandeur. In your mind is a picture of Clan dropships depositing lances of mechs, dozens of them, all duking it out at point blank range on some Federated Suns planet. But, as anyone who tried to juggle a dozen units in Battletech… it was a mess. It is a mess. First off you almost never have all the mechs you need, 2nd you had to photocopy dozens of sheets, and lastly you’d get bogged down. Never mind if you had a few supplemental rulebooks and had to calculate artillery and air support.

The dream is there. And now you can make it happen.

My first 3d printer was a Prusa Mk2 and it did an amazing job with a lot of things. Mechs was not one of them. It did some great terrain for my meager collection of mechs. Resin 3d printers were a thing but they were kind of pricy at the time. Fast forward a couple of years and I finally bit the bullet and got a Photon Mono. This little guy allows me to print miniatures and mechs that are indistinguishable from an injection molded battlemech.

There are two primary sources for 3d printed files, one is Thingiverse and the other is Myminifactory. Thingiverse was once the big boy on the block but suffered from a serious lack of support that drove a lot of people to Myminifactory. As with any online ecosystem size drives more size and today you can find a ridiculous quantity of mechs to print. For free.

This is the core of the new mech era. You go and download an STL, slice it, and print it. Generic resins tend to be a bit on the brittle side but this is manageable if you don’t smash all your mechs about like green army men. You can also blend resins to get a more robust product with some minor lack of detail. I haven’t tested it out yet but have seen good results.

On top of all of the mechs on Myminifactory is Patreon. The most interesting Patreon I’ve seen is from Polygon Masterworks. This guy has “Not Battletech” battlemechs in a mind boggling variety. You know all of those variants produced over the hundreds of years of the game?

Here we have the Wackmaster in 19 variants. 19. 19. Granted you need to be quite a Battletech enthusiast to need 19 varieties of a mech but it’s available.

The printer itself will run you a few hundred bucks and each mech will cost maybe $0.25 in resin. The process I follow is pretty easy. Slice and generate supports in Prusaslicer. Export stl to Photon Workshop and slice. Print. For ease of removal I installed a magnetic Wham-Bam plate that makes popping off those mechs super easy. (If you’d like to see more on the process let me know and I’ll expand on it. It’s easier than you think.)

Once you have a couple of dozen mechs you run into an issue.

We could call it something different but it becomes accounting. You account for movement. You account for pilot skill. You account for attacks. Damage. Heat. Internal Damage. Physical attacks. The system, in my eyes, breaks down after more than 4 mechs per player. You run into futziness once you need to mark out who ran, walked, was stationary, heat etc. For an experienced player it is quick, but a mondo sized game becomes a hassle. Yes, I’ve seen some awesome Excel sheets, but that sticks this in the realm of accounting even more.

“Hey honey, why don’t you get the spreadsheet set up while I get out the mechs?” Said no happy couple ever.

Try teaching the game to an avid boardgamer that doesn’t have Battletech nostalgia. Battletech, for all of its’ character is a system designed 30 years ago. Board games and war games have made leaps and bounds to streamline design and enhance gameplay. But for all of its flaws it’s a functional system, it’s just kind of clunky.

This is Flechs Sheets. It is a digital automation tool to assist you playing on the tabletop or in a virtual space like Tabletop Simulator. It is not a total replacement as it does not track position. You, the player must still interact with your mechs in one way or the other and feed some basic information to the sheet.

After setting up your table (with your 3d printed mechs) you start working through the sheet phase by phase. In this case my Warhammer IIC is walking 2 hexes.

Then we fire on the Mad Cat. You just select the weapons, designate the target, range, and variables and fire.

The combat is resolved and if we switch to the Mad Cat we can declare its attacks. Remember, in Battletech combat is simultaneous, resolution occurs after everyone fires. In this case we’ll have the Mad Cat fire back at the Warhammer.

In classic Battletech style… the Mad Cat misses. Everything. So lets resolve the fire and see how the Mad Cat looks.

The Mad Cat gets thoroughly wrecked. A headshot from the Warhammer’s ER PPC kills the pilot. Now I have not played this multiplayer but you can go up against a friend online. Combine this with something like Tabletop Simulator and you have one fairly amazing Battletech game.

It plays really well on an iPad too. You can create your battle lists, print sheets if you’d like, and still use Flechs to do the dirty work. It just remembers to make you fall down after your leg is blown off.

It’s got a certain charm that MegaMek (another awesome program) doesn’t. Where Megamek is crunchy and dense, Flechs covers just the bare essentials and still gives you the tabletop experience. My greatest triumph has been getting my 10 year old son to play and have it be interesting for him. Seeing the attacks resolve on the iPad and watching as he destroys my mechs bit by bit is much easier for him to visualize than coloring circles on a sheet. This basic enhanced reality is eye catching and engaging.

Lots of board game manufactures have tried to meld the iPad to the boardgame. Fantasy Flight Games did it with Destiny and it just felt flat. Flechs though really hits the sweet spot. Even if you aren’t familiar with Battletech you can hammer through the interface and get a pretty good idea of what an Atlas would do to a Locust.

Now it doesn’t do it all. Missing is the crunchy nuance of more advanced systems but it’s flexible enough to let you integrate your own modifications.

A Shift in Business Model

Battletech has a long and fractious history, and that’s not just inside of the game. If you look at the 40k model they design models, injection mold them at a very high quality level, and then sell you sourcebooks and models to go with it. Games Workshop has some of the best sculpts in the industry and a very robust shipping network. Catalyst in comparison has some kind of crappy old school sculpts and some very new, and much better ones.

By inserting a superior 3d print system a good deal of the business model falls apart. Now they must create strictly IP as it’ll be a tough sell for you to buy a metal battlemech for approximately $15. Kickstarter has done a great deal to bring in new players and generate buzz. (11,200 backers for $2.5 million). But can they do more to grow the base?

This is a Thunderbolt that I printed and painted (poorly and simply). Resin cost was about $0.25. I think it took a couple of hours to print. (An interesting fact on resin 3d printers is it takes just as long to print a plate of mechs as it does a single mech.)

This is a metal miniature with a different sculpt. (Check this link for the crazy history of battletech miniatures). Most of these require assembly and even though they are metal, I’ve found metal miniatures to be fragile and finicky. My first preference is injection molded plastic and then resin as I don’t have to do any assembly other than glue them to a base.

Here is the other three from that print batch. I’m not a terribly good painter and these were mostly to allow me to practice some schemes. If I purchased these 4 mechs in metal, it’d run me about $50. Now I could get them through one of the Battletech sets, if I’m lucky enough to get it in the mystery box.

Resin printers are popping up all over in the gaming communities. People that are way more talented than I am are pumping out amazing dioramas, battlescapes, gaming tables, and stuff that I don’t even know what it is. But it’s awesome. The greatest thing I can see is Catalyst Game Labs embrace the future and create amazing battles, fiction, lore, and supplements all the while growing with stuff like Flechs and Myminifactory.

It’s a symbiotic relationship that can help Battletech become greater than it ever was. The challenge is the 3d printer side of things remove a profit generating aspect of the business. That challenge isn’t going away. Even if there is DMA takedowns then the printer files will go onto torrents or pirated sites hosted in places where DMA has no power. Here is a good link on the legal aspects of this situation. To no ones surprise the law has not kept pace with the technology.

Polygon Masterworks designing a Wackmaster has side-stepped any IP issues that are directly in conflict with Battletech’s IP. He’s just designed a big fighting robot. Rather like the million different variants of dwarves or orcs or “not space marines” you see.

There are 3d printer sites like Gambody that offer 3d models that are licensed (I think?) These are vanity scale models and not tabletop size. Think 10″ tall units printed in many sections.

I encourage you at least to give Flechs Sheets a try with your own mechs and maps. You can even print your sheets right there. It really lets you embrace the battle and the story of what is unfolding in front of you and handles all the starting-and-stopping you get from digging in a rule book.

The best part for us, the Battletech consumer, is a resurgence in interest and content. You have more tools at your disposal to play more games with less hassle. So go, get your giant stompy robot play on.

7 of the Greatest Games I Never Play