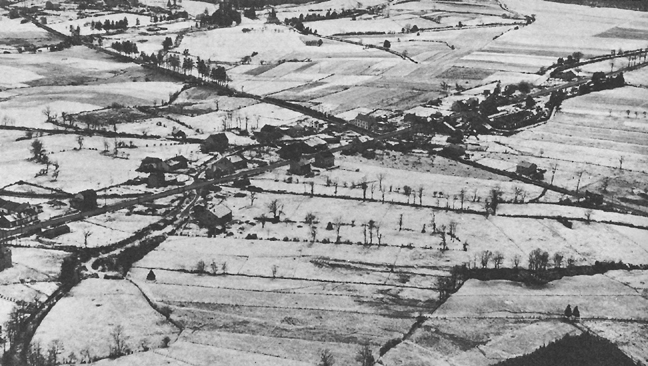 A quick playthrough from Command Ops 2 base game, the Manhay Crossroads scenario. I’m playing from the Allied side. This was first posted on the new ConSimWorld website. They’ve made some big improvements compared to the 1997 webdesign that the site previously had. But here’s some Manhay Mayhem! Also worth noting, this is the new Tactical AI and it is brutal.

Historically the Allied command was caught without support and driven from Manhay. Later though the reinforcements were able to retake Manhay. My goal here is to hold Manhay, give up Freyneux in the south, and use Task Force Kane to occupy Grandmenil.

Right now it’s a pretty sparse OOB. Kane has about a dozen M4’s, a few M5’s, and about 200 infantry of various sorts. I’ll give up Freyneux ad Lamormenil (6VP) and attempt to hold Grandmenil (8 VP).

Next orders sends the 40th Tank Bn into a delaying action from the ridge line back to Manhay. Hopefully this will give me enough time to secure Manhay.

First contact is a dozen Panther G’s. My armor had precious little time to ready themselves so it’s going to be a poor delaying action. On the plus side Kane makes it out and is headed north.

My delaying action appears to be getting flanked. I’m going to give it a few more hours and pull them back into Manhay proper. Grandmenil appears secure.

By 0600 it’s obvious the German advance has bypassed my armor and is pressing between Grandmeil and Manhay. I’m recalling the 40th and having them attack the Panthers on the flank.

The units in Manhay begin to fall back just in time for the 40th to hit the Panthers flank. I’ll try to get the units to go back in but a regiment of Panthers is a tough nut. Grandmenil is holding with artillery support.

By 0900 we have fresh reinforcements and just in time. Manhay is about to fall while Grandmenil is under heavy attack.

By 1500 it’s an artillery hammer against the German advance. My units are having a difficult time getting close while my artillery is keeping the Germans from advancing further.

2000 finds us in command of Manhay, but just barely. We’re advancing on Grandmenil, but the Germans are dug in.

The 48th Armored Infantry finds a company of Panthers holding the VP west of Grandmenil. This means my supply route to almost all of my forces is seriously compromised. Ugh, the AI here is crafty, clever, and taking advantage of me not digging in on all VP’s.

0500 finds us in control of Manhay. The 517 PIR came in and secured the town. Task Force McGeorge routed the Germans at the crossroads. Our intel said they were Panthers and instead were a small Engineering unit.

0900 finds a small German force of 2cm flak trucks and some light AT advancing on my 155’s. I set the forces to level guns and fire on the advance. Task force McGeorge is to secure the area and save my 155’s. Once again the aggressive AI has taken advantage of my complacency.

By 1500 we have secured Manhay while the hostiles probe my supply areas. I think we have it locked down for now. Grandmenil is going to be difficult. My artillery is hammering them but I need to keep a defensive perimeter on my units there. The remainder of the troops will wait until the Germans are worn down by more artillery.

Field Marshall Montgomery is not terribly happy. This was a very tough fight. I’m playing the Steam Beta and the new AI is brutal at exploiting any openings. I should have had a worse score.

Grandmenil was so close to falling. The Germans were down to a few Panthers and some seriously degraded Infantry. All in all it was a really fun round and played pretty quickly. CO2 is really growing on me, I’m going to think on my next round and give it a go in a couple of days.

Next ArticleBattletech, 3d Printers, and Automation