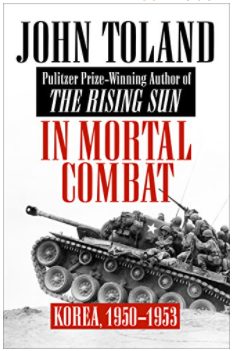 This will be a new column where we’ll look at a piece of non-fiction and pair it up with a game. Few things inspire me to game a scenario than a well written book. Right now I’m reading In Mortal Combat, Korea 1950-1953 by John Toland. We’ll be looking at history through the eyes of the Korea 1950-1951 scenario in TOAW IV.

The first two turns do a good job of preventing me from reacting to history in an a-historical way. I watch as the ROK units evaporate in the face of the North Korean armies. These units remain locked and only a couple can make any maneuvers. This matches up pretty well with the non-stop chaos the book talks about in the opening days as the Rhee regime attempts to find out what is going on.

The scenario really gets going when you start bringing US units over from Japan and building up a hasty Pusan Perimeter. The 25th Division was the first to be released and was, unfortunately overwhelmed as I tried to set up a blocking position near Andong. The first five or six turns feel right as you watch the NK forces race south all the while wondering how to stop them.

One interesting point was how often the 8th Air Force was used to attempt to halt the incoming North Koreans.

The above massive stack of NK Divisions are all in pretty rough shape and that’s not because my units did much but hold the ground. Once the NK assault made contact with the Pusan perimeter my units didn’t have much of an issue holding the ground.

I know at some point an amphibious landing needs to get made, but does the game give me those units or do I pull the 1st Marines? This isn’t a question of should I tactically, but technically, how do I in the context of the game.

Artillery is mentioned often in the book and I make judicious use of it while we hold the perimeter. This doesn’t seem too bad on its own, but multiply it by three and then from multiple batteries. Any time I see an attacking formation we hit it hard.

September 10th, we land our Marines at Inchon. A bit ahead of McArthur. For now I want to make this a thorn and get the NK units near Pusan to pull back. When they attack it’s been fairly catastrophic and when I attack, if I choose my fights right, end up with significant gains.

Inchon was almost an after thought. There was discussion in the book about the Joint Chiefs wanting a different landing area. I was curious where else, but eventually decided to go with Inchon. Mainly because it offered a shorter route to the east coast where I could, hopefully, make a 2nd line. Though in hindsight that is wishful and I just need to cut them off.

Pusan is slowly being expanded. The NK forces are fighting stiffly but my Pershings, Pattons, and Chaffee’s are making one hell of a dent. We had one pocket of the NK 4th Division, 8th Division, and 18th Division that evaporated in the city of Yosu. This will open up the 8th Army to head back north and stiffen the line. It’s was a shoddy envelopment, but managed to wipe out a significant pocket of NK resistance.

The real joy I get from playing along as I read is seeing the unique decisions unfold. I get to read about General Walker discussing how to hold a pass, or what city to focus on, all the while staring at as close a representation as I can. It’s a learning aid but also a way to connect with those soldiers and marines from the past. I served with an Armored Division that also fought in these same battles, it makes for reflection when one sends a Division forward into the abyss.

By October 1st we are making progress. The Marines at Inchon have added a pinch point and are pushing inland. The US 1st Marines catch a North Korean Rail Repair unit and push it back, without supplies the NK units north of Pusan will be in serious trouble.

Huh. That’s weird. No attackers, or defenders, just the message? I’m not to that part of the book yet… I’ll chalk this one up as a weird bug.

Come October 15th we have half of South Korea secured with Seoul in our grip. I am behind the historical advance but doing decently enough. The North Koreans are attempting to escape a pocket while bouncing off the Marines at Inchon. Hard.

I know something is coming. Winter. The Korean winter is notorious and my goal is to get to the 38th Parallel before hard winter hits. As it stands right now I think it’s do able. Historically McArthur would have pushed right to the Yalu River.

This is actually what I was worried about and it seems I managed to prevent a “Falaise Gap Fiasco”. Sounds like a new GMT or Academy Games release eh? But, through it all, the Pocket is holding and we begin to break apart the mass of North Korean units.

The scenario is solid and doesn’t suffer from the size creep that so many TOAW scenarios do. It’s manageable, enjoyable, and completeable. The book has been a real treat too, a welcome change of pace from my recent readings on WW2. It’s a really great tie in from one era to another highlighting a war that tends to get glossed over. Later on once the Chinese enter the war the book really turns into a can’t put it down sort of read. Following the Marines as they escape from the Chosin Reservoir is really an amazing story.

If you prefer the air war side of things be sure to check out the Fall of Seoul, 1950, scenario for Command : Modern Operations. It’s available on the Steam Workshop. It does a really good job laying out the first 72 hours or so of the Korean Air War. It starts a little slow, so let the scenario run for a bit and follow the prompts. The book mentions the constant close air support and air superiority in Korea throughout the war.

The book does an excellent job laying out the MacArthur difficulty and lays a good deal of blame on the political system while still acknowledging MacArthur’s oversteps into the political landscape. He tends to be a very controversial figure and John Toland walks the line well. Had Truman been more forceful with MacArthur it’s likely the General would have lasted the war, but without clear delineation MacArthur stepped into the political realm with statements he was not in a position to make. All but sealing his fate.

Be sure to check out In Mortal Combat, John Toland does an exceptional job.

If you’ve got a text you’d like me to tackle and play a game along with it, please let me know! I’d be happy to dig into it. Or even just a good recommendation. On my nightstand (Kindle) right now is a tome on the Thirty Years War along with a title on the Winter War. Either one should make an interesting playthrough.