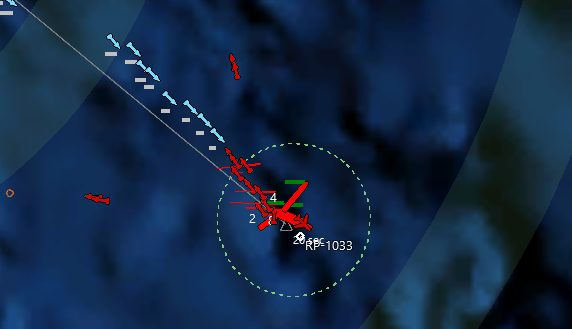 This tutorial will cover my initial process any time I play a Command : Modern Operations scenario. In this case it is the CMO:LIVE scenario Sahel Slugfest. In this scenario I play as a combined Sudanese-Chinese task force that must destroy Chadian-French forces. It offers a wide variety of unique Chinese aircraft and a not oft played theater. Spoiler warnings if you click more, I’ll be showing off the Chinese side.

Spoiler again! If you want to play the French side first and have no idea what to expect, stop now and do so.

Here we go! First fire up CMO, start a new scenario, and browse to the LIVE folder. Inside will be Sahel Slugfest. If you don’t own it you can get it on Steam / Matrix for like $3.

The scenario description is side agnostic. I gives us some fluff and an idea of difficulty and complexity. This is subjective as the scenario designer defines those values.

I select the Sudanese – Chinese side. I scroll through the brief and see the above notice on Enemy forces. This is my OPFOR. Mirages 2000’s, Rafales, and the CDG. Oof.

Next is my forces. A modest mix of obsolescent strikers, gen 3 fighters, and some support aircraft. This tells me that I’ll need to saturate to succeed.

Finally my goal. Destroy as many targets as possible. Note the “rushed deployment” message. This means only certain airfields will have certain weapons. That’s OK, it’ll make decisions easier.

Once I load the scenario I get my scenario features list. Aircraft damage is on, this is good as a plane can take a wound and still limp home. Unlimited base magazines is off, so once ammo is gone it’s gone. Finally I see terrain type is on, this means that the French forces will need to get close to see my ground forces.

Next I run the scenario for about 2 seconds and halt it again. In some scenarios you’ll see a bunch of units pop up as your bases make contact. Other times a scenario message will appear to tell you some critical information. Nothing worse than making a bunch of plans only to see a pop-up appear telling you something different.

In this case not much happens, we see a French radar off to our west.

Working across the theater I’ll open up each base, formation, or vessel and see what I’m working with. We’ve got a wide variety here ranging from ground forces in the west to submarines in the far east.

Starting in the west is the ground forces. The “A” next to the units tells me it’s my allies and not under my control. The exception is the SA-2, but I can’t do much with it. What is very interesting is the allied HQ-16B batteries. These things are nasty. They’ll range out to 40 nm, altitudes up to 82,000 ft, and drop all the way down to 30 ft. Any French forces I lure in there are going to have a bad day.

Next is the Forward Airbase. The A-5C’s are flaming garbage. The Z-19’s are a bit better but will require a very permissive air space. I see both of those as VP mop up after I’ve got air superiority. I also see that there is no Quick Turnaround, so I won’t get to send them out very often.

One side note, when I see aircraft as Maintenance – Unavailable it gives me a clue as to a more meticulous scenario design. This is usually a good thing.

Next is Nyala Airport with some slightly less crappy but still dangerously bad MIG-23BN’s. The strike radius is nice though.

El Fashir Airport is looking better. The iron bombs on both the Fencers and the MIG-29’s kind of suck. I’m used to the laser guided bonanza from NATO doctrines. This is going to be tough.

El Obeid Airport is interesting. The J-10C is fairly competent. The PL-15’s are decent, not as good as the French Meteor’s, but it’s what we have to work with… The KH-31P though is a stout anti-radiation missile to shut down the French radar. Also at El-Obeid is an HQ-9B battery, a SAM with an 80 nm range.

Wadi Seidna Air Base screams anti-carrier operations. That KD-88 LACM is a radar homing missile with a 100 nm range. The other aircraft with the PL-15’s are fairly capable SU-30 clones.

Khartoum has our support wing. The AEW is decent and a tanker is a tanker.

There are some aircraft already assigned to missions. You can stick with them to begin with or delete them all and bring in your own. Sometimes it’s nice to come in and see the basic stuff already done for you.

The international airport has some surveillance aircraft and even more saturation. Just south of this we have an SSM battalion with some teeth. If it isn’t located and the carrier group comes in this thing can help in the whole saturation attack.

Lastly is our submarines. They are assigned to a sea control patrol and I’ll leave them on that for now. There’s not much I’ll do other than verify that the depths look good. In this case I see one is just below the layer and the other just above. The layer is a whole different animal worth its own post, but for now check out the wiki.

Each of the subs has torpedos but also some anti-surface missiles. Getting close enough for a torpedo is unlikely, but those YJ-18’s have a huge range. The Type 095 also has some cruise missiles with an 1100 mile range so if we’re willing to beach the sub it can reach one of the airfields.

Next is the two reference points. My AEW aircraft will follow this flight track.

Meh. It’s a very safe air track that is quite far from hostiles. At the track it can just cover the Forward Airbase and Wadi Seidna. But it’s a trade off. Edge too far one way and I’ll lose track of potential carrier strikes. Too far the other way and I’ll lose warning of the Chadian based Rafales. Neither is a good option and seeing as I want to kill that carrier group I’ll keep the AEW centrally located until it has been neutralized.

So what first? We have 47 hours to complete our mission. It’s currently 0100. Dark. Our aircraft are dropping iron bombs and will do best in daylight. This gives us a few hours to put up our support aircraft and a basic air patrol. Same over the sea, I’ll get my maritime surveillance aircraft up.

I’ll drag these patrol points around once we see what is in the air.

We’ll talk about #3 first as #1 and #2 are already in motion. The range of our strikers dictates who goes where. The nearest French airbase can be reach by aircraft from Nyala, but Nyala can not reach the western or northern airfields without a tanker in between. So that rules out the western airfield as a target unless I’m willing to stage tankers over the Central African Republic.

I’ve also got some ARM missiles that can reach the radar west of our ground forces. This is probably a prudent move as depriving any radar early on is a benefit to us.

We’ll run the scenario a for a bit and see how it looks and adjust our plan from there.

12 seconds in we receive a message from command. Remember I mentioned that above?

6 minutes in and our aircraft move to position. No new contacts yet.

I turn on the radar on the Y-8X Cub and direct it south. A minute later we pick up radar. This is a good time to turn off the radar and turn around. I want to get back in the shelter of my SAM’s.

More bogeys appear, and they seem to be moving towards my poor Cub.

How can I use this information? One, the Red Sea is narrow and any carriers have to operate from a very small area. If I draw a line back from those planes it may give me a launch zone… I redirect one of my subs that direction.

The incoming multirole fighters are drawn into HQ-9A range.

Unfortunately the hostiles did get a missile off… The poor Cub doesn’t make it. On the plus side we do manage to knock out one of the Rafale fighters. As I’ve only got one more Cub I’ll send it far north and hold for a bit. The wingman to our first Rafale is knocked out as well. You can check your scoring log at this point too if you’d like. Those Rafale’s are worth a good deal of VP.

While I’m focused out east a flight of HIND’s strike at my armor! My CAP is 200nm away. Ech. The SAM batteries knock them out quick like, but there are more inbound.

You can see that the initiative here has swung to the French forces. I’m now reacting to them instead of they reacting to me. But I don’t want to send out my aircraft into a strike that they can’t handle. Once we get closer to dawn we’ll send them to the tankers and then off to the airfields in the north. As dawn approaches I’ll lay out how I do my strike.

We’ll schedule our mission so it goes off at 0411 ZULU time, or about 0511 local time. I’m going to leave our flight size at 4 aircraft as this is going to be a full flight.

The target list becomes interesting. Concrete things are hard to kill, soft things are much easier. In this case I’ll drop the terminal as it has zero bearing on the launch of aircraft. The AvGas tanks are a good choice as they are squishy and filled with flammable stuff. The revetments will get dropped as well, those are tough. Runways and access points become a tough choice. They can be hard to kill and you can totally waste an entire flight dropping bombs on them and not knocking them out. In this case we’ll drop them from our target list.

By assigning these 16 aircraft we can hit 4 of our 5 targets as each flight will strike one item on the target list. So either I drop the avgas or we go to a 3 bird flight. That’s what I’ll do.

In a perfect world you’d recon the strike first and assign to exactly the right targets. In this case we just go in.

Then we get a sighting on the CVN and I assign all appropriate aircraft for a full saturation strike. Nothing fancy here, just everything we have available. In this case that’s weapons from inbound strikers as well as submarine launched anti-ship missiles.

Note, I haven’t shown everything I’ve encountered so as to keep the scenario fresh for you.

But a saturation strike will look something like this. Ideally my strikers from the west would have arrived at the same time but my timing was off a bit.

And there we go! One major objective down. The rest of the scenario though is a tougher nut to crack. You may have figured out that the strikes against the airfields will be tough. And you’d be correct. The Rafale is top notch and the French have some high grade SAM’s. But I’ll leave that to you to find out.

There are a lot of ways to skin this cat. Which is part of the beauty of the LIVE scenarios. You can try it one way and then do it a different way without sinking dozens of hours into the game. The LIVE scenarios are absolutely worth digging into for a great experience, Sahel Slugfest has been one of my favorites.