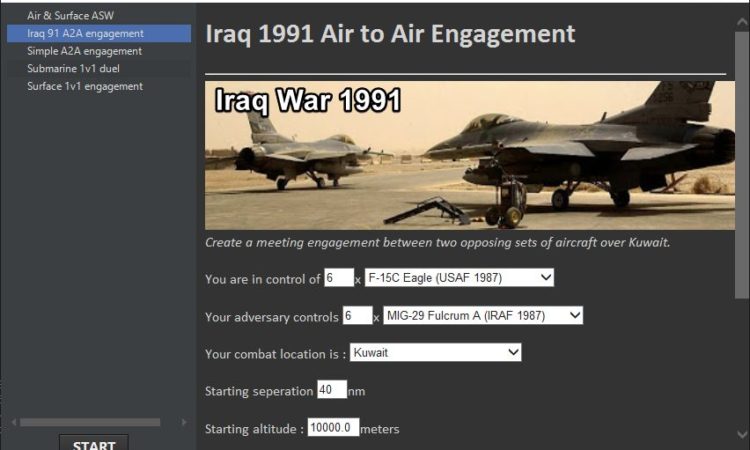 A clever bit of code makes for an interesting, infinitely variable battle generator. Even better is it can be modified with a bit of html and a touch of Lua to really do some unique stuff. I’ve just scratched the surface but this might be the coolest addition to CMO.

Of all the new features in CMO the Quick Battle Generator initially passed me right by. Tacview. The new maps. The terrain model. All those seemed way more exciting. Only now do I realize the battle generator is just as cool.

My initial skepticism was the few available battles. It was neat, but there was so much other cool stuff to dig into that I passed it by. Then someone asked on the Matrix Forums how do change the starting location and I decided to dig into the code.

That’s when I realized I underestimated what this was. It wasn’t just a repeatable blank scenario but a method to create all sorts of awesomeness with an HTML user interface. I added the above html myself, made some lua modifications, and now you can pick exactly where in Iraq you’d like to have this engagement.

Beyond that is a fully featured Lua file, just like you would run in a scenario. Now to make it really shine you need to think in groups of data, variables, so the code is a bit more than just a ScenEdit here and a loop there.

But that’s the beauty. With a few extra modifications I’ve added starting altitudes and locations. Next I’m going to get an option to bring in land based radar or AEW, then the potential for some random SAM’s. It’s not just smashing two platforms together but an entire mini engagement with a ton of variables that are easily changed.

Usually a CMO scenario is historical, or at least historically based. There’s no difference here, except you get just the meat of fight. If your dream is dogfight after dogfight, or ground strike after ground strike, or whatever, this is the key.

Sometimes I want to dig into a massive week long scenario with an OOB big enough to choke a goat, other times I just want to be a plane nerd and watch missiles fly. Warfaresims gave us the tools to do just that.

Because it’s so flexible it requires a bit more than the average script monkey. Though I’m not an expert by any means and managed to work with what was presented and make some really cool additions.

I’m hopeful they’ll add a method to start with the CWDB so we can generate some Korean War scenarios or even Cold War Gone Hot sort of stuff. The whole system is geared to really open up the possibilities.

As far as the nuts and bolts, the wiki has a good write up as well as a YouTuber named P Gatcomb.

There’s also a thread on the Matrix Forums where, hopefully, more folks will add Quick Battle templates. Given some time I think we could see just as many cool templates here as we have with scenarios.