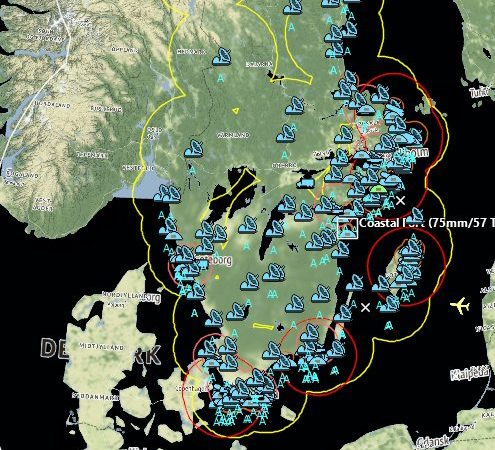 Sweden. 1990. It’s been two weeks since the Soviet Union invaded Germany. The world holds its breath as it wonders who will use nuclear weapons first. West of Fulda the US 1st Armored Division halted the advancing Soviet Guards Divisions with incredible losses. The 82nd Airborne in coordination with the British Parachute Regiment have, against all odds, held northern Denmark.

The Soviets, needing to knock out Norway and Denmark, look to open a new front.

As we last left our post we had the basics. A layout, some airbases, and a heap of radars and coastal artillery.

To make things easier to differentiate I’ve switched to the Relief Layer. The next big thing I did was create a group for both the coastal radars and coastal defenses.

This does two things for us, one is it cleans up the visual for the user. Instead of seeing 40 different radars, none of which we need to interact with, we just see the range rings. The second is it’s easier for us, the scenario builder, to give orders to a group.

That’s the view when you select the coastal Radar group. It’s a lot cleaner on the above image.

Now should a player decide to set EMCON differently for certain radars, they could detach them from the group and assign them to a different one or leave solo. Why? Well, they could have some go passive in the hopes they survive a SEAD strike. I’m not sure how realistic this is/was, it’s not like they had an AEW bird flying a race track over Stockholm.

For now we’ll leave it as is, maybe we can create a special action down the road to allow the player to shut some of them off.

Git Time! I save my file, swap over to git, add my notes, and commit it. Now I’ve locked in that moment where I have all of the radars and coastal stuff done. If I screw up the next phase and accidentally save, I can go back in history and grab the version I need.

Now we’re going to fast forward a bit. I’m separating the Swedish armed forces into distinct groups. For the moment I want the Swedish Defense Force (The Player) to control surface ships, aircraft, and some ground forces. The coastal batteries and radars will have a simple and distinct AI to react to threats. (More on this in the next post)

Wowser! OK, so I got a bit carried away with myself. I still need to group up the coastal artillery, but that’s not an issue. Why group everything?

Otherwise it looks like that. This way the player can go into unit mode, select targets and such, then drop back to group mode for a cleaner look. In this case we’re also using groups as distinct command blocks to make things susceptible do disruption.

The scenario has friendly submarines but they aren’t under player control. Mainly to stop scenario creep but also as some realism. Subs are going to prosecute a mission, not be available for micro-management to slip between ships that only the surface radar might know about.

The next post will be more about the Event system and how to use it in Lua, but it ties in directly with what we’re doing here.

Next ArticleCommand : Modern Operations – Birth of a Scenario Part 3