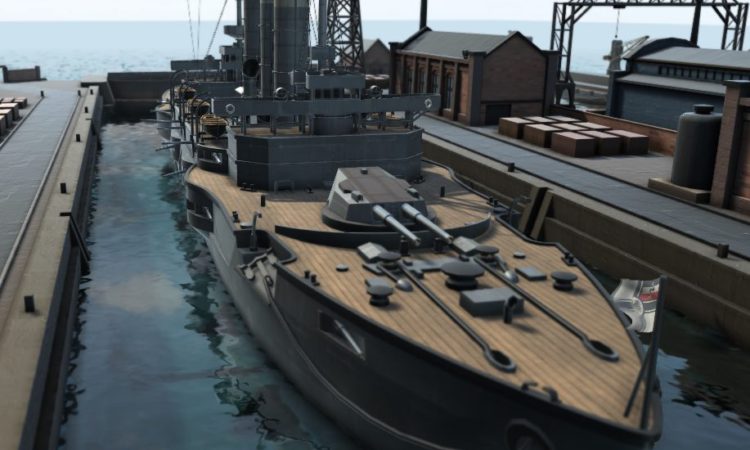 One can’t discuss this game without first getting into Rule the Waves. I still feel the first one was a pioneering masterpiece. It brought together meaningful R&D, a decent strategic level, and a great tactical level. Add to all that a quirky worldscape and you had a game with no other parallel.

The second game is good, but was evolutionary instead of revolutionary.

First off, the game is beautiful. Not pretty, not quaint, but beautiful. Ships burn, metal folds, a ricochet careens off into the distance, waves crash and prows burrow into the sea.

At port, during the ship design phase you get a great looking hull and fittings that change as you drag them about. Superstructure, funnels, and even turrets are adjustable as you see fit. (More on the design phase later)

At the moment the Campaign mode is disabled and one only has 21 “tutorials” that can be maddeningly difficult to nail. As this is an Alpha I’m willing to concede that not every bug is worked out and some ships are inordinately tough with very short time frames for completion.

Fans of Rule the Waves will recognize a decent amount of choices above. It appears that instead of a random “research” we may see a linear progression through types.

What’s interesting though is you still get the granular hull and armor adjustments right down to the tenth of an inch.

Weaponry has the same choices, a multitude of sizes, configurations, all with a drag and drop placement. Or, if you are not a design engineer, you can click an “Auto-Design” button and have a passable warship.

The sound is one thing that really caught me off guard. It seals the deal for immersion. Shell splashes. Groaning steel. Burning ships. You zoom in on a dying ship and you almost feel it.

Damage is modeled in what feels like a realistic, if overly tough, manner. Some missions give you 15 minutes to sink a large quantity of ships and the damage model stretches things out. Or maybe my ship design sucks?

In one mission my battleship is pitted against an agile light cruiser. I slowed to give my big guns a better chance to knock it out and was shortly hammered by a torpedo.

Larger battles are one area that I see a big question mark. Everyone wants a Jutland or Tsushima. Above I have one BB and four destroyers. I’d like to zoom out even further for a great tactical view but I can’t quite take it all in. Hopefully down the road they’ll allow a super-far out zoom for handling massive fleet engagements.

Half the fun of RtW was driving one division of ships into the fray while a second looped around for the sucker punch. I’m hopeful with all we’ve seen so far that it’s going to look good.

Once UA:D gets a full blown campaign, and if it can do large fleet battles, I think it’s going to far overshadow RtW.

It seems to push all of the same buttons, ship design, world sea control, politics, R&D, all with a graphical overlay that looks great. RtW had a quaint charm, but UA:D just looks great and, so far, plays great.

Unless you are an absolute Dreadnought nerd who has “Jackie Fisher” tattoo’d on your ass, I’d wait until the campaign is fleshed out. Otherwise dig right in.