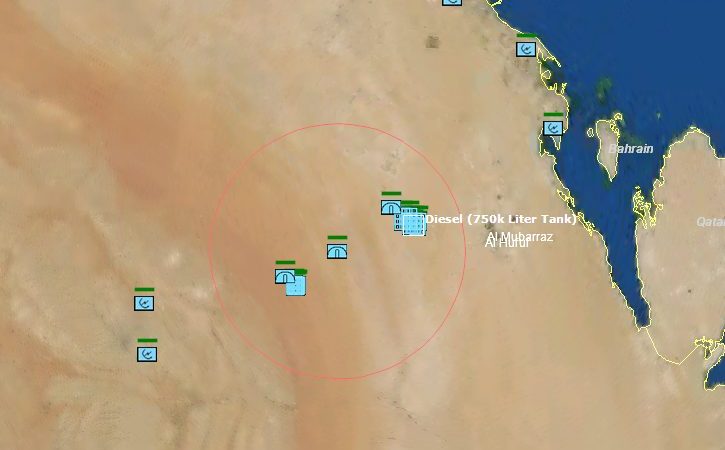 More details have emerged since my previous post and we’ll take another look at the situation. The tough part about operating with open-source intel is well, it can be a bit rough. On the plus side it’s easy to test all this out in CMANO. So we’ll make a few more scenarios, test out what we can, and see how the new information looks.

First off a shoutout to those of you who reached out to provide links to Twitter threads. Also a shout to the French and Spanish speaking forums that linked here, Bonjour! Hola!

An additional shoutout to the sudden influx of site visitors from Saudi Arabia, UAE, Oman, and Iran.

I’m basing this new scenario on information at TheDrive and from Michael Duitsman on Twitter.

As a comment on the first post from BP mentioned, these were smaller rockets than we tested above. Interesting too is that the larger missiles we tried out were intercepted. These smaller guys were not, not to mention we had the wrong air defense units.

Michael Duitsman’s analysis gives us some great information on where the Shahine system, Skyguard, and Patriot is located. According to the reports they mentioned the Patriot battery was looking towards the location of most likely threat, Yemen.

The Shahine SAM can be seen at CMANO-DB here. The Crotale system is highly regarded for the era, I’m not terribly familiar with how it stands out against things like drones and cruise missiles.

First off I’ve created an overlay so it looks less brown and we can set the defensive positions approximately on position. For more information on how to do that please check my post on custom overlays.

We’ll start with it as it is. There is Abqaiq showing the locations of air defense sites per Michael’s map. The Patriot is pointed south towards Yemen. We’re going to set all of our forces at “Regular” proficiency.

Above is why. Michael also mentions that the Patriot battery never had an opportunity to engage incoming targets. (We saw this in our previous test as well.) Now we’ll switch over to TheDRIVE’s articles and see if we can populate the OPFOR.

This is where things start to get interesting. We originally tested a Soumar missile. This is not a Soumar. It’s a Quds-1 missile and we don’t have one in our database. Arms Control Wonk has an exceptional write up on this missile that we’ll use for pathing possibilities too.

Being that it is not a Soumar creates an issue. Either we need to provide a proxy or use the Soumar knowing the RCS is wrong and reduce the range accordingly. Another option is to request a database adjustment to include the Quds-1 missile. (I’ve requested the Quds missile, but it may or may not be entered)

Next is where. The magic question. We hear southwest Iraq, there are reports of drones flying over Kuwait, and people who think these may be ship launched. Southwest Iraq provides an interesting spot, as does the border area of Iran. We’ll start there as we have some basic intel calling out the Kuwait connection.

Note, current data says that cruise missiles engaged the oil field to the west while a drone swarm struck Abqaiq. We’ll stick with one location and change variables accordingly.

I’m going to run this in Editor mode, watch from both sides, and see where detection occurs. Something to remember, while in Editor mode you are changing the scenario itself so if at any point you save you are resetting the start point of the scenario to the current point in the scenario.

Our proxy Quds-1’s head in (Soumars) and are undetected 18nm out. They successfully flew from Iran, over Kuwait, through the Saudi desert, and are now closing on the refinery.

The strike played out better than before. The Skyguard’s caught the incoming missiles. The Shahine engaged and knocked out a few but not before the refinery suffered a few strikes.

If the Quds is roughly 2/3 the size then some of the above numbers will be slightly different. Radar cross section and visual detection range will change a bit.

On the drone we have a similar situation.

We have no idea what sort of drone this is. It is not a Shahed 129, which is the newest drone we have in the Iran database. Iranian’s are calling is the Qasef-3, a jet powered suicide drone. Interesting question, what differentiates an armed suicide drone from a cruise missile? I think at a certain point these two merge.

In our test scenario the drone is identified when it’s almost on top of the refinery facility. But in enough time to knock it out.

Except the sites weren’t all manned. And on top of it we’ll reduce the skill level of the crews. We’ll try it once again and see how they fare.

Pathing becomes quite critical, if the drone moves in the proper locations then it becomes immensely more difficult to detect. I’d wager that Iranian forces probably also can look at Google Maps and pick out these pads and steer accordingly, same with ground intel.

In all these cases the only thing that detected the missiles or drones was the Skyguard or Shahine. None of the radars in the north would pick them up unless we steered them too close. Given the approximate range of the Quds-1, (435 miles) there’s enough room to steer west and avoid that network while still coming into the refinery from the east. The drone’s capabilities are a bit more opaque.

With an Arleigh Burke, the USS Nitze, headed in, what would that have done? The only positioning information I have is “North end of the Persian Gulf.” Not much to go by.

As before the missiles aren’t detected until they reach the target zone. If anything the Nitze is closing a potential path and allowing the Saudi air network to focus on the Kuwait corridor. But even with an Arleigh Burke hanging out, a sufficiently small target will become a difficult item to identify and track.

All of this makes a last length point defense system even more important. But then it becomes a matter of drone saturation for Iran. All in all this becomes a difficult situation for a scenario. Just because we can model it doesn’t make it a fun scenario for a player. Sometimes there’s no winner, just degrees of loss.

CMANO has evolved over time and hopefully we’ll see a “Drone Focus” in a future expansion to really let us explore this evolving battle space. I imagine at a certain point you see point defense become drone integrated, how much more capable would a mini-AEW drone be? Would it launch counter drone-drones? AAW Drones?

It really makes you wonder how to properly protect a billion dollar piece of infrastructure from $10,000 worth of throw away drones. This is the enjoyable part about the game, we can model a real world situation and take our own knack at tinkering with the whole works.

Michael dives in again with an analysis of exactly the situation that we’re running into. In a nutshell this is tough to deal with. I’d like to hear how your modeling of this situation went so either hit me up on Discord or post it in the comments here.