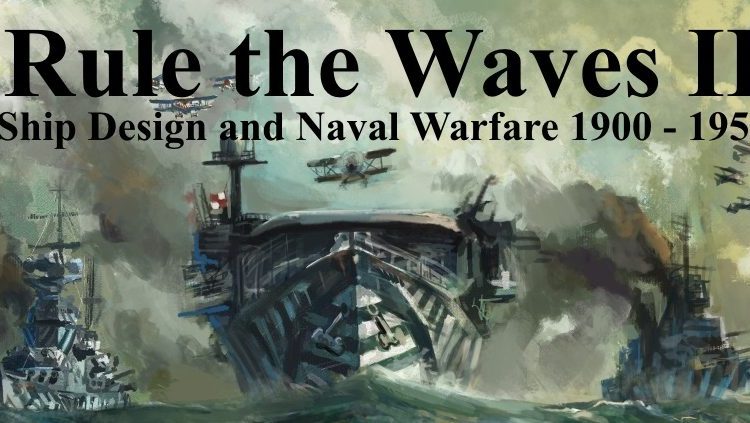 Rule the Waves 2 is a early-mid 20th century naval combat simulator/ship designer/bureaucrat game. Have you ever wanted to play as Jackie Fisher? Designing new fleets, tactics, all the while fighting off political demands? Balancing a budget, starting wars to get more money, torpedo’ing civil reforms? Then this is your game.

The first Rule the Waves was a surprise hit. It built upon a basic simulation layer (the lackluster Steam and Iron) with an entirely unique strategic layer. RtW1 broke ground into an entirely new area unlike anything else out there. From 1900 to about 1925 you got to control the great worlds navies and steer them through a changing era.

It’s like a cake. A base layer of chocolate cake is good. But add frosting and man, you’ve got a tasty creation. A subtle layering of flavors can make a basic dessert into a masterpiece. But get too wild or stray too far and you no longer have a tasty condiment but a mess of flavors.

Let’s cut to the belt armor here. RTW2 is a fun game. But it’s also needs some polish. It experiences, crashes, some questionable design choices, a UI not much beyond Microsoft Excel, but through it all somehow maintains a quaint charm. It is, on very many levels, not derivative of any other game designs; take this as both good and bad.

Christopher Dean, from NWS has commented on this review, found below here. I’ve taken his feedback into account and I’ve spent some time speaking with other friends about the game. A few things have changed from the original review.

First let’s look at what it gets right. It gets a lot of things right. The ship designer, an afterthought of common derision in 4X games, is fun here. Not only fun but a place where a choice in the early game can have a long life into the 50’s.

As your technology progresses you’ll unlock better turrets, weight savings, speed, so a ship from 1945 is much more powerful than the same tonnage from 1915. You always walk the cutting edge between budgetary needs and military desires.

That is the core of the beauty here. Tradeoffs. Do you act belligerently for more funding, and tension, or play civil and stretch out a few more months till war? You always need more money. Tension is about the only way to get more.

The major change to RTW2 is aircraft. This is a game for the carrier age. While the Dreadnaught was king in 1918, the aircraft carrier reins supreme in 1940 on. Force projection really becomes amazing. You send your carriers to the extent of the range and strike, hoping that the enemy hasn’t done the same to you.

When it works right, it works exceptionally well. The horror of seeing 20 torpedo bombers appearing on your fleet is priceless. You definitely feel like a Nimitz or a Yamamato.

As each turn progresses you may get a political choice, you may see research progress, or even see a ship or sub completed. Depending on the budget you can design, build, train, allocate, shift about, or just click next turn.

Once you enter a war you’ll get missions. You may accept or decline them (as may the opponent). These range from convoy defense to bombardment to fleet engagements. Declining them costs victory points. The battles themselves are real time with acceleration.

The battles, for the most part, feel pretty good. The control setup is rather obscure and can be a pain for large fleets. One must be careful to not accept a mission with your forces deep inside hostile waters, and this can be a real pain depending on the theater.

Aircraft, the core of this release, are almost an abstraction. Yes, kind of visible in a weirdly obscure way, but they are functional. Little red dots signify air groups, slightly larger ones airships.

The AI is competent. It behaves like you’d expect and can surprise you with a destroyer rush. Sometimes missions end with no contact, but that’s OK, usually someone is going to Davy Jones’s Locker. Or wherever airplanes go when they crash into the water.

The process to launch them though is a pain. Unlike gunships that open fire on their own, you must give strike orders to your strike aircraft. Then the little icons fly off and eventually you get a pop up announcing a strike. You may get a few hits and they recover.

It is very satisfying to see things like airships and parasite fighters moving about of their own volition. Seeing AI strikes come and go is really exciting, even if you usually have zero control over the units. This is both historical, and in some cases absolutely not.

More than once I entered a war thinking I was predator only to discover that my battlecruisers lacked punch, or my planes were out ranged. Now I was on a defensive footing attempting to draw out the hostiles. The nature of the world map made this challenging as you don’t get to choose the engagements.

Which brings us to the bad. I’m tempering this as this is a small team.

Aircraft, the main theme of this game, are both land and naval based. You as the player can control the naval based aircraft. Determining the details of land based aircraft, beyond a checkbox, is out of your control. Which leads to the Thunderdome.

The Thunderdome is what happens when every airbase you have launches strikes along with every airbase the enemy has. For me this has been the Mediterranean. Aircraft don’t begin in the air, no assets are pre-deployed, every single plane launches at mission start. Often with hilarious outcomes.

But the utter lack of coordination can be maddening. Planes bomb airfields, hundreds of aircraft are destroyed, all the in the span of a day. By the next mission everything seems to be fine and beyond a VP loss doesn’t seem to make much matter. On top of it the game halts every time the Thunderdome progresses so it can take an hour of just pushing next while having no control.

It’s neat to see the first time but then becomes rapidly stale. Much of this could be abstracted and simulated away and the player would be none the wiser. About the only time it could have an impact is when land based air units directly come hunting.

Among the most glaring issues is the war system. The world will only go to war against you. Multiple nations may attack you, but they will never attack each other. Now a nation may ally with you and appear in a limited fashion, but you never get to dogpile into an AI war.

Another odd choice is including the Confederates States of America as a “what if” but not including the Ottomans, a historical figure that at least could have had an interesting navy. Countless other “minor” powers would have made for more engaging gameplay on a limited scale. Let me play a Spain or Sweden with a more limited scope.

Supposedly SAM’s and AAM’s are coming in a future update but I’m not sure it’ll add much other than a layer of abstraction rather like the bombs or torpedo’s.

The homegrown DRM is another oddity worth mentioning. You purchase the game, run it, generate a Site code and a MID string. Then you send the codes to an email address. Then you wait for an individual to respond back with your serial number. You get a 3 day grace period in case said individual is busy.

My concern is for the future. What if NWS ceases to exist? This software is tied to one machine and is now non-transferable. Instead of DRM free or even on Steam, I have to deal with manual key generation. These are all problems that have been solved, NWS attempting to go it alone is just odd. Christopher Dean has responded on his system, but I still think it is a potential issue that is hopefully addressed in the future.

The store/APS system has been working as intended and we, in great detail, looked at all our options and decided we did not want any 3rd party involvement due to centralization, technical, communications, financial, and logistical reasons. We all have long backgrounds in this industry and felt this was the best direction to go in.

I am the one handling the APS system codes and have left 3 ways for customers to contact me.. email, forum, and FB directly. I even pinned a thread just as another avenue just in case email fails. All code requests have been handled well within the grace period and any issues due to human or technical error have been responded to quickly. We already reported that Win10 has an Outlook error that can create unresponsive email addresses, this has also been reported in their official support forum pages. We also have the APS instructions posted in the store listing, forum, and install.

I’ve seen enough games where the servers go dead, the phone-home mechanic dies, or someone just screws up, and I’m stuck with a dead game. The potential for that occurring here is real. This game is viable only as long as someone with an @Yahoo.com email address continues to service it.

I’ve run into numerous crashes, errors, and general pop ups about floating point difficulties and other such gibberish. The game functions and I’m willing to wait for a patch or two for flawless execution.

Ship design can be frustrating when you try to make a ship and it just tells you it’s an illegal design without telling you exactly why it’s illegal. Same with overseas holdings, you need a certain amount of tonnage on foreign station but the mechanic doesn’t feel fun or engaging.

Even with the oddities, quirks, poor UI, and downright strange design choices, the game is fun. It’s an enjoyable romp in a whole new genre of game. NWS has laid groundwork in a particularly new and unique way that I hope others capitalize on. Rule the Tanks? Rule the Jets? Rule the Rockets?

The game could benefit from a simulator/auto-resolve in the vein of what TortugaPower made. Sometimes I don’t want to fight another cruiser battle.

It’s just waiting for a ridiculous mod of crazy tech like dual hull catamaran battleships with a carrier deck on top. Airships with guided missiles. Look at the crazy stuff you can make in Aurora 4X, but do it here. There’s so much potential, but I only see the game moving ahead in the current vein. I’m not sure NWS has the resources to create a title much beyond this one.

All in all, it’s worth the money. It lacks the quaint focus of the previous title and the expanded scope brings problems. A patch or two will hopefully subdue the nasty bugs and smooth out the gameplay. If you’re into the era definitely give it a go.

Next ArticleCombat Mission on GOG