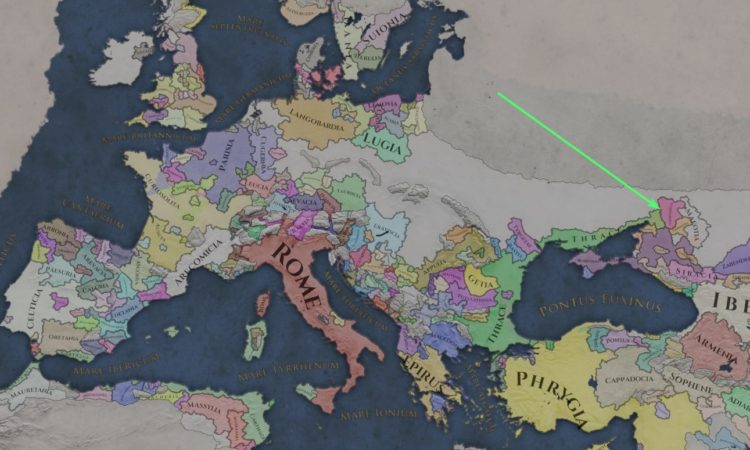 Imperator Rome : Yet Another Review

Paradox’s Imperator : Rome tackles the Roman world circa 200 BCE. Carthage is ascendant, Alexander is still a recent memory, and Gaul has yet to be conquered. The world of antiquity is being replaced by what will be the Roman behemoth.

In a nutshell… it’s a good game. We’ll get more into it later, but I see a lot of reviews comparing it to EUIV or CK2, games with added DLC, patches, and a plethora of mods. They say the same thing, “Wait for a few patches and some DLC.” The game will be really good in a few patches, but I think you’ll miss out on a rewarding experience.

The map is, for the most part, really great to look at. (It still needs a bit of polish, see the overlapping icons) I find myself scrolling about to the mysterious parts and wondering what exactly those people are like? Particularly Germania, a place I’m looking forward to diving into.

The tutorial sets the stage for a modest Rome to expand into all of Italy and eventually come into conflict with Carthage. Hannibal and his elephants loom large across the Mediterranean. Overall it does a decent job of telling you “what” to do, if not “why” you are doing it.

The Senate, for example, feels like a shell just waiting for a patch worth of focus. It almost has the feel of your council from CK2’s Conclave, but not quite. Declaring war can be a decision between incurring some Tyranny or adding a dash of favoritism. It’s a basic start, but yearning for more.

That’s probably the key more than anything else, everything is here. It’s a solid start. The foundation if you will. Trade. Diplomacy. Naval Combat. A whole host of things that are rather basic are just begging for their own expansion.

My first ramble north (I decided to leave Carthage alone and focus on Transalpinia) seemed basic, boring, a series of “fabricate claims” followed by a short war. The parties were all rather boring. I really didn’t care who owned Venice (Venetia). Then I crossed the alps.

Suddenly I was beset on all sides by people with alliances, defensive pacts, connections. Just steamrolling wouldn’t work anymore as that random patchwork of Gaulic nations suddenly could attack me on the flanks. As it stands right now I’m slowly worming my way to secure the mountain passes and not anger the Gallic hordes.

Regardless of how pleased the nations are, you still run into barbarians. People who suddenly descend out of the hills and siege you! It’s an unpleasant surprise to be on the ropes and have some barbarians descend from the mountains. (I can’t wait till that’s a playable faction!)

At times certain things jump out at you that seem out place. Starving populations. Trade items seem to offer bonuses, but starving people? Where does this come from? How do I even see how much food they have? Part of this is the general unfamiliarity with the layout, and part of it feels like they are missing something.

Combat follows the same vein of EUIV and CK2. You maneuver units into what you hope is favorable terrain and are greeted with a basic summary at the end. I’ve found that it feels about right, my heavy infantry can hold out against a large quantity of light infantry. The AI really seems to like building Chariots. In the mountains.

You do get some tactical choices, the “animals” and it’s a neat touch. My units have the ability to make Roman Roads, which I thought was really awesome! Then I realized I had to do it individually and not just set a final destination.

Naval combat seems to be on the fringe. I’ve only done a bit and used it for some invasion type stuff. Again, it needs some focus. Rome wasn’t a terribly naval power but given the connection to the Med, it should play some important part.

One interesting tactic a friend of mine is using is only hiring Mercenaries and not maintaining a standing army. Mercenaries are actually on the map and don’t just appear at your capital. That’s a nice change from the insta-armies of the past.

I want to bully my neighbors. I want to lay down a gladius, point at the city, and say “submit.” These one city little petty states should gladly join up. Where is the whole “You surrender and we don’t burn the place to the ground” option?

There are enough interactions to keep it fresh, but not as much depth as I’d like to see. But again, it’s a solid basis for future expansion.

Same with the characters themselves. They are more indepth than EUIV, but not as crucial as in CK2. I wonder what Caesar thinks of that? Or Crassius? Or Vercingetorix! The ancient world was filled with monstrous egos that still shock us, over 2000 years later. I really hope we see more of that vein. For now I really don’t care what happens to rando-senator #7, except he has good stats.

I’ve played Rome. A very small piece of a very large map. Egypt, Phrygia, Thrace, Gaul, even Maurya (India) looks to be well represented. Once I tire of Rome I’ll probably dig in to Belgica or Germania and see if I can thrash some legions. A few focus DLC’s and man, this world is going to come alive.

But it does need some work. The UI feels like it was made for a 2560 or wider monitor. (I’m running 1920X1080) Menus seem to overlay what I need to see on the map, this is particularly frustrating when I’m trying to see who is allied with who from the Diplomacy screen. It also can feel like a pile of %’s that you are juggling without really knowing what an additional 0.6% Freeman happiness actually does.

It is worth commenting on the performance. I’m running an i7, 32 gb Ram, SSD’s, and a 2080. I get about 25 FPS, less when it’s war time. It hasn’t caused me any issues yet and I haven’t noticed any stutter, but I wonder long term. I’m hoping I don’t get that terrible late-game CK2 crawl.

My verdict, it’s a good game that has the potential to a great one. Don’t listen to people comparing it to a game with 5 years worth of DLC. Imperator Rome will get to that point, and likely in one or two big patches. Already it has a richer canvas than the bland generic feel of Stellaris. I can say Rome, or Gaul, and you already have a picture in your head of what to expect. (Toga and awesome mustache, right?)

It’s priced fairly at $40 launch. Wait a DLC or two and you’ll likely get it for $20, but then get into a DLC or two… But that’s Paradox’s model and one I don’t mind as the base game still receives patches to keep it up to date.

Get it at ParadoxPlaza or at Steam.

Bonus reading! Mary Beard’s SPQR is an exceptional read. I finished it up a few months ago and it really got me excited for playing Imperator : Rome, go check it out!

Next ArticleRule the Waves 2 Review : Does it Still Rule?