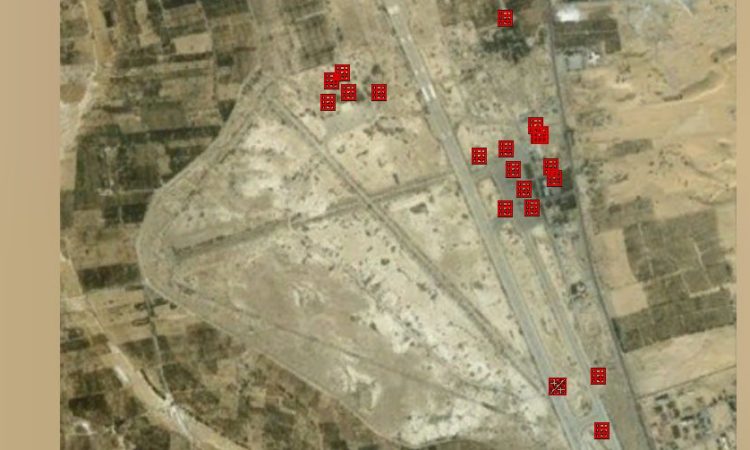 Out of the box CMANO uses a map set known as SRTM 30 Plus. This is an open repository from the USGS with tiled data from across the globe. It’s great for CMANO on a macro scale, but what if we want to get right in and see individual target points? What if we want to do it on existing campaign scenarios? Luckily it’s not too hard! A caveat, this won’t work for the standalone versions, you need the full version of CMANO with the editor.

There’s a few tools we’re going to need. First off is a program called GMap.NET (which isn’t found at Gmap.NET, but at Codeplex as of October 2017). Baloogan has a version that you can find on the Matrix forums but I found the behavior wonky at times so instead I’m using the newest version of GMaps. Go over and download it here : https://greatmaps.codeplex.com/

Unzip it to a directory and open the main executable.

It’ll open up and you’ll be looking at Lithuania. It’ll also have blue tiles that will state some sort of error. Don’t worry about that. You want to find a gmap type that fits your needs. Oh, click and delete the starting markers. We’ll be adding our own.

Then select your map source. I like to use the BingSatelliteMap. It’s worth noting that the creator of this software got into somewhat of a hulla-ba-loo over rights. Seems the end-user has rights to look at the map but he doesn’t have rights to disperse it like this. So I dunno, but it works. This probably also explains why CMANO uses a large open-source map database.

At this point open up CMANO. Instead of clicking Campaign or Start new scenario, go down and click Load existing scenario.

If you’ve never done this before don’t fret. It’s easy. This is also a good time to throw in a warning about backing up your files. Browse on over, make a backup copy of the original and stuff it somewhere safe. I’m going to open my latest favorite, Hit Hard Hit Fast, from the Six Days War. Select it, and click Load Selected.

This will open up the scenario at the starting moment. It’s important not to run any time or make any major changes. Otherwise when you save it, guess what? You’re saving at that new position. For starters lets load up the El Arish Airbase. Find it in CMANO, zoom right onto it, and press CTL-X. This will copy the latitude and longitude for our area. Now paste that somewhere convenient and stick it into GMap.

And we see an airbase once we zoom in a bit. Yay! Worth noting that this is a modern aerial map so things won’t match exactly from 1967. So your mileage may vary depending on the scenario and age of the airfield. Now lets grab it. Put your mouse in the upper left corner of what you want do drag, hold down ALT, and draw a big blue box. Just grab the essential area and not all of Egypt. You’ll see why…

Now click Get Static over on the right menu.

The zoom level is important for size and detail. make Worldfile tags this with both lat and lon data so CMANO knows where to put it. I usually use zoom 14, it’s a nice middle point. You can’t zoom down to count rivets, but for this sort of thing it works great. Some people use zoom 17, but to give you example at zoom 14 the file is 1.09 megabytes while at zoom 17 it’s 67 megabytes!

Click generate and it’ll grab the tiles, stitch them together and probably drop them onto your desktop. You’ll have one image file and another file that ends with .pngw. We need to drop the N! Change it to .pgw.

Flip over to CMANO and click Custom Overlay right next to Start/Resume.

This is what you should see. Be aware that a massive image file can take awhile to load into CMANO. This guy is pretty little so it’s OK. Now swap over to Unit Made (V) and check out the layout!

I’ve included a bit of the base image on the left and right. Sure the map of El Arish isn’t as crisp as it could but it loads fast and is enough to get the idea. But now we have a problem. Once you save this it won’t pop up once you load the scenario later. We need to work some more magic.

Don’t click add existing but click on Create new, of type :. Yes, it’s a button, just not differentiated well. Now browse to where the file is and click on it. Save your scenario and now things get a bit wonky. CMANO has associated the file with a GUID (Generic Unit ID) and saved a copy in the CMANO folder. We need the GUID.

Browse to your CMANO folder, find the AttachmentRepo folder and find the most recent folder. Then you need to Right-Click, open the properties and copy the file folder name.

Now we need to add a trigger for when the scenario is loaded. So click Editor and go to the Triggers screen.

Now we need to make a Scenario is Loaded trigger.

Then make an Editor Action of type Lua Script.

This’ll bring up the Edit event action box, no worries, just name it something recognizable, say, ImageLoad, and use the code below. Replace my string of GUID with your own. Be sure that there’s an ‘ on other side.

If we had a dozen overlays we’d just keep stacking them as above all into the same Event Action. Almost done! Now we need to merge our Trigger and Action into an Event.

Pardon the plethora of red arrows, but this repeatable one is important. Check it! That way everytime you load the scenario as a player it’ll load the maps. Otherwise it’ll only happen the first time.

Now click OK and save the scenario. Time to test it out. Click on File -> Start Menu, go to Start New Scenario, and load the scenario you just edited. If you did it right you’ll be able to zoom in and see the map you attached. Pretty cool eh?

Do you really need it? Probably not. It’s really helpful for building scenarios, but I think it adds a ton to the narrative. We spend all of our time staring at a map, I think we should make it look as great as possible. Hats off to Baloogan who laid the basic tutorial.