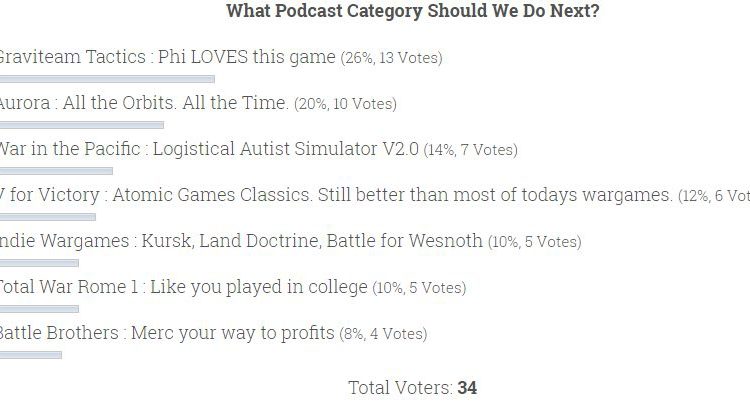 Our first listener poll is mostly in and 34 of you have voted to see Graviteam Tactics covered first followed by Aurora. Thanks to everyone who voted! So far we’ve had really reception to the show and look forward to covering the less covered niches.

Originally Aurora was in the lead so I’ve been living the VB6 life until, surprise surprise, GT has squeaked out a lead! Both are great games and completely and totally different. We’ll cover a brief synopsis on each. If you have questions about either of these for the podcast please leave them in the comments below.

Graviteam Tactics, developed by Graviteam, is a series of games all using a very similar style and interface. The developer is based in Kharkov Ukraine and is a counterpoint to both Combat Mission and Command Ops 2. The 3d layout and adherence to real physics makes the game an extraordinary simulation. Troops behave like you’d expect, micromanaging is at a minimum, but an unusual interface and difficult documentation make the game obscure and niche.

On top of that it has a strategic map where you can move reinforcements, hit flanks, and try to secure your (usually very difficult) objectives. This is probably one of the hardest parts to get wrapped into as it lacks the ease of use that Command Ops 2 provides. The tactical level is really great but if you come from Combat Mission you’ll find the change over frustrating as you can no longer set a long list of waypoints and orders. This is actually a good thing! The game rewards planning and simulates actual combat engagements.

With a few re-designs, documentation, tool-tip redo, and a decent manual could turn this game into one of the finest in the wargame community.

It all started as a tool to help a man named Steve. Steve had a dream, a dream where he could play a tabletop space strategy game called StarFire on his computer. Steve was no ordinary mortal, so Steve wrote a game using Visual Basic 6 that has all of the design aesthetics of a second rate accounting software. But by god, did he fulfill his dream.

That game is Aurora. And while it looks like shit, it is the thing star dreams are made of.

Aurora is un-apologetic about what it is. Mainly because Steve doesn’t care if you like it. The game is free. No DLC. No texture packs. No graphics to speak of. Instead he’s focused every single bit of energy to make a game unlike anything else out there. And if you don’t like it, Steve doesn’t care. He likes it.

So what is there to like? An extraordinarily detailed planet system, terraforming, cargo, combat, progression, mining, and well, even a SpaceMaster layer where you can play your own Dungeon Master. This is the game that Traveller should have turned into as you can literally play a pen and paper RPG in the most realistic way possible and still have it be fun. As long as you don’t mind the interface.

It’s hard to criticize something that is exactly what it set out to be. In it’s context I can complain about the lack of automation or the weird little quirks, but all in all it works. The biggest hurdle is the interface, knowing which menu to find the submenu that contains the table that links to the information you need. Yes, that really is a thing. In an odd turn based sort of way it works. You will run your entire galactic empire in the equivalent of Turbotax 1997.

If you’ve wanted to be Black Jack Geary, a Heinleinian fascist bureaucrat, or a Spice Baron, then you can abso-fucking-lutely do it. One of my first games I played as a military theocracy and it was glorious. (Until, well, it was a bad day on Phobos).

So what do you want to know? Any questions, thoughts or ideas? Drop em in the comments and we’ll get it out!

Graviteam Tactics : How to Use Artillery

Next ArticleGraviteam Tactics : How to Use Artillery