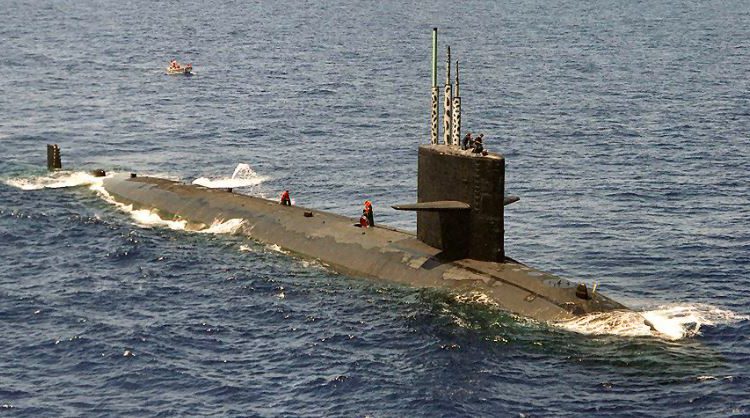 Defining a search pattern is a damned difficult thing to define. Am I moving too fast? Too slow? What is my detection range? So I made up a little scenario and did some statistical analysis. Lets see how it all looks!

I needed a repeatable and easily adjustable scenario to test out the sub mechanics. So I created a very simple scenario. On one side is a single US Navy Sturgeon Class submarine. On the other is a Soviet SSBN, Delta I class. Both about the same age and of the same era as we find in Northern Inferno. I defined a small patrol area for the Soviet sub and had the Sturgeon drive directly into the center of that area.

The first samples will be at 5 knots. Sonar is off. All that is varied is the depth. Each set of variables will be run five times. We move in to the range where we get a solid finding and record that. In some cases we get a rough contact 16nm out, other times it’s around our mean detection. Seas are state 0, weather is good, sea depth is about 1200 feet.

The target sub is in the middle of the layer moving in a random pattern at 5 knots. The bold text shows our position in relation to the layer.

Deep (On the Sea Floor)

Best performance is above the layer. The problem is this is also the best place for the hostiles to hunt you! Interestingly enough below the layer is statistically the same as going deep. Plus as an added benefit if you go deep you can speed up and be less detectable from surface units. In the layer is the worst detection and why the Soviet Sub was hiding there.

So how does this impact our search probability?

If we laid out a grid the size of what we’d need to cover in Barents Sea Boomers we find that our detection probability (more on this later) is pretty shitty.

So if you’re a smart kid, and I’m sure you are, you’d want the safest place to hunt with the best probability of detection right? So you’d go deep and go faster right? Except now our performance starts to fall. At 10 nm/h we see our mean detection only changes to 7.1 nm. But, in the big picture, 7.5 nm @ 5 knots gives us a 14% detection probability. While 7.1 nm, slightly lower, but at 10 knots gives us a 26% detection rate!

If you and the target are on the same side of the layer (but not in the layer) I found detection ranges of about 13-18 nm at 5 knots. This also applied if both subs were on the bottom.

Active sonar kills. And usually not the target! Once we turn it on every sonobuoy in the neighborhood is gonna go wild. But, for the sake of science, how’s it look?

Down deep we absolutely see the hostile long before he sees us, about 40 nm. He only sees us about 20 nm out! However once the target is in a different layer or inside the layer, things change. Then it sucks. Our distance to detection is barely above passive, if at all.Things get interesting with the convergence zone as in that case we sometimes get blips early, way early, but then lose them until we’re closer. Does the target get those returns as well?

So unless everyone is on the same side of the layer and not in it then avoid active sonar. For that matter I’d avoid it anyway. Too risky for not enough gain.

Now before you throw this all down as absolutes, test things out yourself. Different eras will behave differently. One sub system will be completely different from others. Maybe keep yourself in the layer and pop above it every 12 nm at zero speed, listen for a minute, then drop down again? Or stay deep, go fast, then do the same? Lots of different ways to try this out. Tons of variables, and lots of fun exploring it all.

Here is a little calculator to play with your detection times. This is based off of a formula from Naval Operational Analysis. Pump in your info and see how your chance of detection changes. Now I’m not a mathematician, just an engineer, so yes, your argument about this not being valid for a moving target is totally correct. But it lets us compare changes in variables to see the impact on time.

As a fun exercise bump up your speed like a P3 would have, say 240 knots, and drop your time to 5 hours and see how that impacts performance. Crazy right?

Next ArticleStrike Command : The Commandering - A Cooperative Let's Play