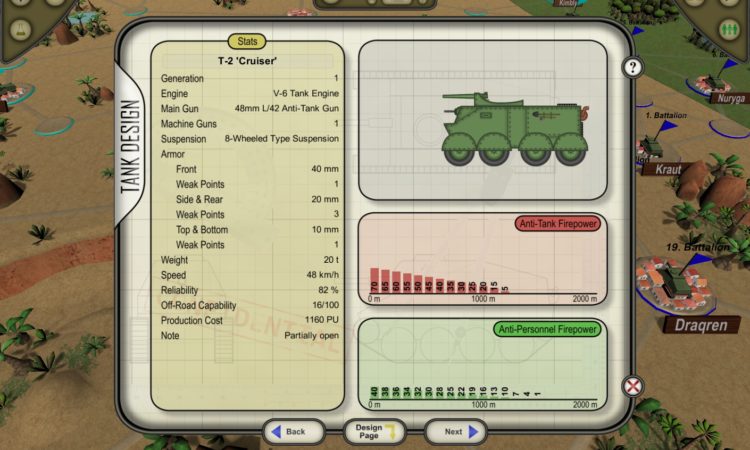 Land Doctrine is a game that, for $5, offers a good deal of enjoyment. We’ll break down what it does, and follow that up with what it doesn’t. If you like the thought of managing a land war, and nothing but a land war, and controlling the design philosophy, then this is your game. You are top brass in this game, someone with stars on your shoulders. Watching the fight is beyond you, all you do is see the results.

It’s not a bad looking little game. Instead of hexes and turns we have a WEGO map with little armored units. Each is a battalion, of your design, that holds spaces or attacks them. Terrain matters, as does urban attacks. There can be up to four factions (including yourself) on a map that can be quite ponderous. War is immediate. You load up and go with a basic army and some even more basic tanks.

You’re greeted with a basic “How-To” once you start playing each game. There isn’t a tutorial or the likes, nor does the game really need it.

Research is incremental and lets you choose between armor tech, infantry tech, or industrial tech. Each nation accrues research points as time goes on and then spends that on research. It’s worth note that you also have to wait a period of time. This feels like a redundant mechanic. Give me one or the other.

Each city is a production hub. More cities. More production. Bigger war machine. You see where this is going right? Divide and conquer.

In addition to picking research you can use what you’ve learned on different tank variants. Early in the game you don’t have many choices beyond just up-armoring or swapping a single gun. Later on your can experiment and see the final impacts with a wide range of variables.

Production is fairly simple. You pick how many companies you’d like, the type, loadout, and support. This makes some interesting trade-offs, more troops gives a harder hitting army but now you might be light on battalions at the front.

You’ve got three presets to play with for your infantry. Prefer carbines over rifles? Or maybe you’d like more anti-tank components? It does offer some interesting choices. I usually struck the middle road but I can see specialization between army groups for certain situations.

Each troop loadout offers flexibility as well. Initially you have it broken down between Regulars and Reserve. You could add shock troops, or cannon fodder, or whatever.  These troops act as not only reinforcements but also as the soldiers for your new battalions. Given the ability to shift things around offers some flexibility.

The battle system is fairly simple. Advance your own battalions, set a few variables, and then let it go. It’s worth noting that some battalions move faster than others so you’re fragile reserve battalion might arrive before the meatier regulars.

The resolution is heavy on the details for each phase. This reads rather like a battle report from a Grigsby game. At each phase-range you get to see how your forces performed and what sort of casualties you incurred. The winner remains in position while the loser retreats. If those loser retreats into another hostile army it is destroyed. If your armies can arrive at the next destination before the shattered army, it’s destroyed. This feels like an unintentional blitzkrieg mechanic.

Finally you get a summary from your troops on the ground. In a lot of grog games it’s hard to tell what worked. Even in Rule the Waves you sometimes have no clue if a certain battleship was all that effective. Here at least you get some instant feedback and can use that to gauge the effectiveness of your forces.

One thing that sets Rule the Waves and Children of a Dead Earth apart is a tactical layer build on top of a research layer. Not only do you get to steer the research, perform the design, but you can also play as the Admiral or star marshall. You get a deep down, visceral, in your face, example of the prowess of your forces. (Or lack thereof). You can try a crazy design of just casemate guns on all of your battleships. Or you can tinker with huge engines and just railguns.

In Land Doctrine we get a summary and no visual of what’s going on. I can understand why, but it still makes me yearn for a Rule the Waves type game that let’s me play with crazy designs and watch them get destroyed.

Combat feels a bit off. One engagement will seem like a surefire win and ends up being a total rout, and another battle is the total opposite. Though it seems to be very player dependent as I’ve heard some people spend hours and have a really fair match up.

My biggest issue is lack of a run up. A year long cold war would allow the player to steer research and get a wildly different game without having to survive the initial onslaught. The AI seems either suicidally aggressive or docile. One game I found myself attacked on all fronts while in another everything seemed chill. The chill game let me play with more designs and it was a more satisfying game.

For it’s few flaws it’s a surprisingly solid game. Sure I can complain about it not having a tank-on-tank physics simulator, but it’s not what the game set out to do. For just $5 it’s a damned good deal.