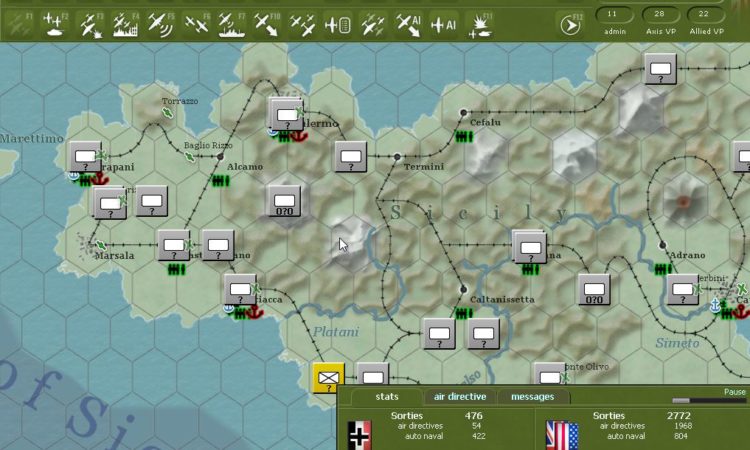 I was quite pleased to see that in WitW the introductory scenario is actually fun. One big complaint I had about the Velikie Luki tutorial in WitE is you don’t actually get to conquer any territory, just watch everyone freeze to death. Road to Minsk made a much more compelling learning experience.

This isn’t so much a tutorial as it is a running journal, my attempt to understand what the hell is going on. War in the West is a significantly different animal even if it looks fundamentally the same as WitE. The biggest difference is the air engine. Remember the air interface in War in the East?

Yah, about that. Now let’s look at War in the West and see how it all pans out.

War in the West Operation Husky

Operation Husky was the allies first attempt to drive back the Axis on Continental Europe. The so called “soft underbelly”. So on July 10th 1943 the allies invaded Sicily. This operation, historically, was a success. Later on the slog through mountainous Italy proved to be much less effective.

In our game we load up the scenario and are faced with this screen. (It’s the same as the one above.)

Well. That’s an opening. Now since we’re invading in the South, I’ll click the AMPHIB SUPPORT SOUTH box. When we do this the priorities change quite a bit. We have lots of interdiction, lots of air support, and virtually nothing for the strategic bombers to do other than support this operation.

Then, to set all of our orders, I click SET AIR DIRECTIVES and it loads up all my goodies. I also click AI MANAGE as I assume it knows more than I do about this particular thing. The SUMMARY button gives me a bunch of info that allows me to really follow the Rabbit Hole. Here’s a little snippet of that rabbit hole.

We can see the mission info here. #1 is our range, and #2 shows the path to the purple area. The purple area is our mission area and grows depending on what we put in on #1. For now we’ll leave this alone as there’s a lot going on here. In fact from what I can see, this is the meat of WitW. So back to the AI menu…

Here it is in case you aren’t sure how to get back to it.

Woah. Look at all that stuff happening.

Lots of aircraft noises, camera clicks, screen shifts, and sorties. Lots and lots of sorties. We see icons appear and disappear as the entirety of our air missions run. In WitE this was all kind of abstracted into your combat values (for the most part). This time we see that abstraction, though I do wonder if things like close air support are still abstracted into ground combat.

Right, well, lets drill down one of these menus and see where it leads. Lets look at some of our ground combat, we took a lot of losses, or at least more than the others.

Time to go even further, let’s see how our interdiction mission with lots of losses on both sides went. I click on the INTERDICT text and it brings me to the map!

So what happened? Well, the Luftwaffe got stomped.

If I show the details and go to Air Losses we see that it all happened Air to Air and not from flak.

The air combat tab sheds some more light on all of this. The Luftwaffe was on a patrol at between 16000 to 19000 feet while the Spitfires were running escort and sweep at about the same levels. The DIS is a disruption penalty, which it looks like the Spitfire suffered but not the BF-109’s. DAM is how much damage that flight received, while DAMD is how much it did to its opponent. Was it superior piloting? Better equipment? Did someone get the jump on someone else? Whatever it was the Luftwaffe got stomped.

We also have RAILWAY missions that increase rail usage. I’m assuming that’s good for us and bad for them?

We’ll close that out and proceed to the rest of the map. This looks a lot more like WitE! Except less snow and Russians.

This is where things get interesting. Amphibious assault is kind of wonky. No other way to put it. On this turn it’s already all been prepared so we don’t have to wait for the divisions to get ready. Now if you try to set all of this up on your own you have to wait until you accumulate enough points to actually invade. Luckily we’re good to go.

The game uses Amphibious HQ’s, aka AFHQ’s, to actually do the landing. I picture that as the unit with the landing crafts and such. Important to note that they also become a supply point and temporary harbor. You don’t move this unit around once it’s landed, it’s not a ferry, we’ll get to that in a bit.

This is where it gets kind of weird. The actual invasion doesn’t happen this turn but in its own special pseudo round that happens in between the end of this turn and the start of the next one.

After this unit is at sea I go and hit INVADE on the rest of my AFHQ’s. I’ve got a lot of them, including some US units.

Imagine waking up to that on the beaches? Right now I picture all of my units getting into landing craft and preparing to invade.

At this point you’ll want to move your other units that you want to go to Sicily into the port hexes. In fact if you feel confident (and we do) you can load them onto the ships and get them in place to go ashore. Note that we need to depart from a PORT, but we can go ashore at an AFHQ.

Once they are in a port hex we can hit F3 and go into Naval Transport mode. Then we can direct them to move all the way to Sicily. Be aware that at a certain point you may run out of port capacity. See that circle inside the anchor? That’s port capacity.

The last thing before the invasion kicks off is the get our Airborne units, well, airborne!

This works very similarly to the AFHQ mechanic. Select Airborne Movement (F9) and our airborne stack.

On 3/1st we see a set of coordinates with DROP below. This unit will, when you click DROP, head out on the mission. 2/1st still needs a target. Click on the TARGET button then right click on the destination hex. Try not to drop them onto hostile units. It can go badly. (Sorry 82nd Airborne!)

Once we click DROP we’re given a choice of aircraft. I’ll go with the AI’s decision and then our boys are off! Once your unit is READY to drop if you change the destination they will be unready and need another turn to get ready. I actually have no idea how to determine how long until a unit is ready to drop, or any indicator other than a target, as to determine drop readiness. Next turn maybe?

Wait! There it is, the Airborne Planning Screen. (ctrl-a) Which shows us our airborne units, transport cost, destination, and most importantly preparation. It looks like only the 3/1st BR are ready to go. Oh well, more next turn I guess.

Alright, time to end the turn and see the mayhem.

As the turn runs we get to see the Axis phase followed by our Amphibious and Airborne forces making their landing. Then this is all followed by another Axis phase. (The air phase maybe?) Finally it heads back to us! Which brings us back to the Air Directive chart. This time I’ll turn off AMPHIB SUPPORT and tweak the values a bit to support the troops now that they’re on the ground.

I tweaked it a bit, but for the most part I left it the same. Strategic city bombing doesn’t seem to be a priority here but I can see in a full game where it would be absolutely critical.

The end result was less mayhem then last time. We loss a decent quantity of aircraft along with suffering a lot of damage. The Luftwaffe wasn’t nearly as beat up. Maybe they moved North?

Here’s out force disposition for the start of the turn. The Axis forces are retreating north towards the mainland.

So that covered the odd points of WitW. As I’ve said before, it doesn’t drop you swinging and advancing like WitE, instead you need to piece through a few things to get rolling. I’d loved to have more tooltips. There’s a shitload of information here. Two shitloads. Alt-tabbing to the manual every time is a pain. Even worse is Alt-Tabbing then using the find function and reading about every instance of “rail usage”.

It could use some more polish. The phases feel a bit odd, especially when invading. Though I understand why it’s done the way it is. The game is growing on me. This’ll now be about the 8th time I’ve invaded Sicily. I’m not sure I’m ready for the longer game yet, but at least I’m understanding what’s going on.

Next ArticleRome to Charlemagne : A Different Wargame