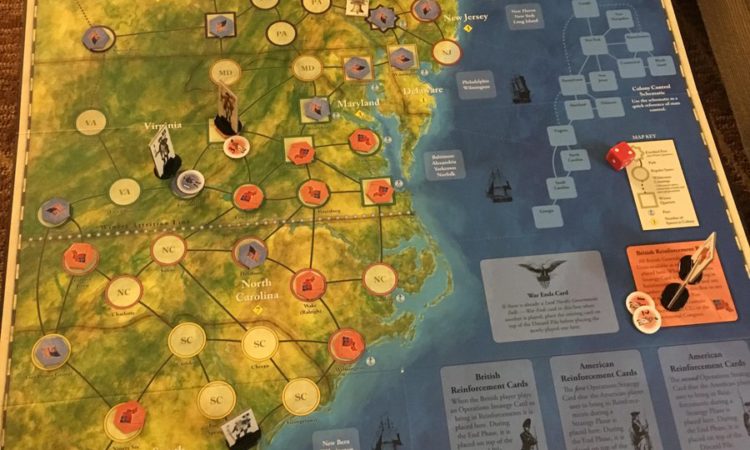 Sometimes I feel bad for the Revolutionary War. For whatever reason the American Civil War tends to get all the glory. Even the movies for the ACW are better. (Though I do enjoy The Patriot). More re-enactors prefer the ACW, hell, even video games are pretty devoid of this era.

The components are excellent. The game board is well laid out, concise, and only a bit tight in the New England area. Otherwise you’ve got plenty of room to maneuver fingers about without worrying about knocking Generals over. It’s also a very pretty game board to look at.

Speaking of Generals you get two choices on how to present them on the board. One is a black plastic holder that stands them vertically or as counters. I don’t have much preference, though the vertical holders give them a nice touch.

Each side is dealt a hand of seven cards. These can range from Event cards, ops cards, or campaign cards. Each player plays those cards to accomplish different tasks.

For example you can play an Ops card to place political control markers. The Ops cards also allow for activation of generals and this is where it gets interesting. American generals activate with a lower Ops cost than do the British. So the Americans can be much more nimble. Now on the flip side the British, when activated, tend to hit harder and move via the British fleet by sea.

So right off the bat both sides play totally different.

You can win by eliminating all the opposing armies, or by political control of the colonies. The British need to control 6, the Americans 7. In the case of a tie the British win by default.

At first it seems like you want to fight, but in reality it’s all about political control. Some states, like Rhode Island, only have a single space to control. Virginia has 11 spaces. So it’s much easier to control Rhode Island and Delaware than it is Virginia and Pennsylvania.

In order to flip a placed political marker you have to actually move an army onto it and play an ops card. (Or an event card that allows you to.) So now you have to move one of your armies about (which costs ops) and potentially send them out into the wilderness where the American army can pounce.

Once you play all of your cards you move into the winter attrition phase. The British, if in winter quarters, suffer no losses. However the Americans always suffer losses (except Washington’s Army). So that hard won American army dwindles in the frosts of winter.

Right off the bat my opponent (my sister) attacked General Howe in Boston with Washington’s Army. Both had 5 combat units. This was a very risky move. The British have a +1 advantage due to the British Regulars being active, and also another +1 for having the British Fleet as support. Howe and Washington are close to the same quality of general, but you roll and determine whether or not your general is having a good day.

General Howe wasn’t having a good day. He rolled a 1 so his combat rating was halved. This was followed by a roll of a 2 for overall combat effectiveness. Add in Washington’s luck, and the British were decisively defeated.

After that we rolled to see how many units the British would lose. You can lose up to a max of 3. In my case, that’s exactly what happened. This triggered a nasty side effect too, I lost my British Regulars advantage for the rest of the game. Ouch.

After that the Americans decisively controlled New England and were able to deny me almost the entire center of the map. So instead I had to work with the South and incursions from Canada. Eventually the French were brought into the war as well and placed a very nasty blockade on me.

One very cool mechanic worth pointing out is the variable end date. Depending on the card, or lack of cards, the game could end in 1779, or 1783. This can be variable too, one round you think it’s 1780 and then your opponent plays the 1781 giving another year. What seems like a frantic drive to the end suddenly goes into overtime.

By the end I lost by two colonies. But it was damn close. Had I been able to flip just two more political control markers I would have won the game.

The game flowed quickly, was easy to pick up on, yet almost immediately we saw the potential for lots of different strategies.

The manual could have been better. GMT games manuals tend to be lacking white space. This one is definitely better than some, but still not great. The enclosed play aids are very helpful. Though I would have liked to have seen two more dice as it’s easy to forget rolls while looking up combat values.

Add in a really good Vassal module and a vibrant community that plays it and you’re likely to have no problem finding a willing opponent.

So in closing I heartily agree with @SpaceRumsfeld, aka Bruce Geryk. It’s one of those games that I think of when not playing and ponder different strategies. Not many games stick with me like that.

Washington’s War at Amazon or from the GMT Games Website.

Next ArticleStrategy and Grognard Games : The Most Popular Niche