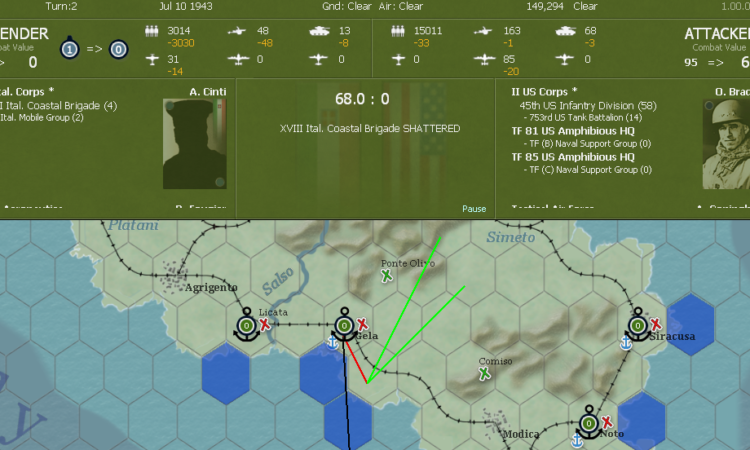 War in the West : And Now for Something Totally Different

Gary Grigsby’s War in the West is not in the same vein as his other monster, War in the East. Where War in the East is firmly an Eastern Front game, War in the West is a Strategic Bombing game with a ground combat layer. Where air power is mostly abstracted in WitE, in West, you get to handle it in all the gritty details. It’s not a bad game, but it’s definitely a totally different one.

The first thing that caught me off guard was the air war screen. Instead of immediately sweeping panzer divisions about you’re greeted with a table asking about air power focus. About the only thing I recognized was a bit about air power being used for an amphibious landing so I turned that on. The rest seemed to be about strategic bombing.

Now, to get it off my chest, I’m the kind of guy who hits the manual after I play.

So things got a bit wonky. There seemed to be an order necessary to actually get it to work. Seeing as I was now a bit confused I turned on the AI MANAGE AIR button, but it didn’t seem to do anything. Finally I hit execute and watched, well, watched a lot happen.

The air combat window ticked and chugged like a 1930’s teletype machine. The focus of the screen bounced from one spot to the next all across Sicily and Italy. It said like I’d flown something around 12,000 sorties. This was not what I expected.

What the hell just happened?

Now, right off the bat, I’m hit with one of those things I never liked about War in the East :: How to gauge effectiveness. The bombing campaign is obviously a long game mechanic and is meant to show that long, slow, methodical bombing campaign that eventually hammered Germany into a barely mechanized society. But how do I, the player, determine if it’s effective. Or, for that matter, if I’m sending out too many bombers, not enough, just right?

For this short campaign it probably doesn’t make much matter. But oh boy, there is a lot going on under the hood here. My i7 CPU was groaning as it crunched all the numbers. The more I browsed the battles the more I became intrigued. Railways were hit. Railyards. Ports. Ferries. Units were interdicted. Now it had my interest. Maybe I could decipher some of the more immediate stuff.

I read a bunch of summaries and, well, I’m impressed. As you can see above we have flak, aircraft, operational losses, damn neared anything you can think of. Now on the downside it’s a ton of info and I’ll have to spend more time (a lot more time) learning what the hell is going on.

And then I was totally lost again. The Amphibious HQ thing is weird. It seems like any game has issues with moving troops in an amphibious manner. How do you abstract out the landing crafts, destroyer support, battleship bombardment, and all of that into an easily used mechanic?

I dunno, but this is one more stab and I’m not sure I like it.

Basically your Amphibious HQ is everything need to perform a landing all in one unit. Then you move combat units into the same hex and wait for the preparation to rise. The more units, the longer the prep time. In this scenario the units were already ready to go, all I did was hit the “Invade” button. Then the units cross the sea and ready themselves to attack during the next phase.

This isn’t a ferry unit. You don’t actually need to move it back to port to bring in more units. And that’s where it got weird. The Amphibious HQ remains as an onshore supply port. Then you move units across the sea via the Naval Movement button and offload them at the Amphibious HQ ports. It was OK once I realized it, but it just felt wonky.

Then began the shit-stomping of Sicily. At this point it all felt a lot like War in the East. We rolled up on two flanks. One group, the British, went up the East side while I sent Omar Bradley and his boys up the center. The Italians crumbled, but they held a damned stiff backbone with some Wehrmacht support thrown in.

It took a few turns for me to bring in all of my combat units. A well heeled defender could have attempted to drive me back into the sea, but it would have been tough with my Airborne units coming in too. The air landing mechanic works similarly to the amphibious prep method but takes less time. Just don’t do like me and drop the 82nd on top of a well defended airfield!

By the end of the scenario we had driven the Axis from Sicily with fairly minimal casualties. The air war still seems pretty opaque. I’m not entirely sure how to gauge how effective I was. And really, I could see that being by design. Did the allies know how effective air bombing was? Sometimes I’d think yes, sometimes no, but either way I’d like a more concrete notion of at least what I “think” happened. Or at least what my subordinates think.

It could be I’m missing something, as the game is quite deep and that little nugget of info might be buried in a chart or display.

Once I got over the few interface oddities I enjoyed the game. It felt like a bigger brother to War in the East. In fact one major reason I’m playing this is to get familiar with the air engine as it is supposedly going to be used in War in the East 2.

Ahh. Now you see. But I’m worried that if they don’t streamline it that the air engine will make WitE2 even more difficult to understand than this game.

One other weird thing is the naval layer. Everything is kind of abstracted so you end up with something like above. I have no idea what Naval Interdict Value +423 means. Is this good, bad, indifferent? They really need to take a cue from Paradox Interactive and add tooltips for everything along with clear distinctions of good and bad.

The manual is also, well, a bit dry. This seems to be a Matrix thing. They offer a really nice hardcover manual that has text that’s more in common with a legal procedure. Less text. More whitespace. More examples are definitely needed. If I can get some good time with the game I plan on doing up some tutorials. I much prefer reading a good explanation than sitting through a YouTube video of it. Though I may do some focused videos. We’ll see.

One other issue the game has, and this has nothing to do with design, is the fact that the Allies will always be on the offensive while the Axis will always be falling back. It was just the nature of the theatre. Compare this with WitE where both sides have a chance to attack, and then defend. It’s not a flaw in the game, just something to be aware of if you want to play strictly as the Axis. Gone are the days of mass encirclements.

All in all it was a good buy. I’ll get my time out of it in the future. Though it’s a bit steep at the normal price. If you prefer the bocage of France over the steppe of the Ukraine, then definitely check this game out. And keep an eye out in the future for some tutorials.