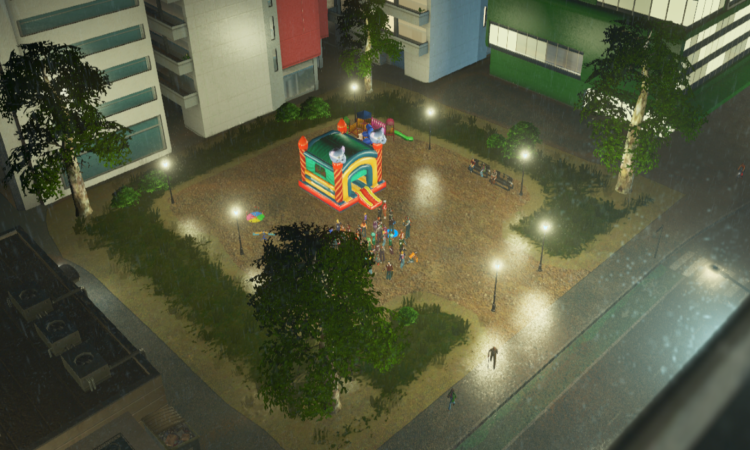 Cities Skylines : No, you can’t drive.

TL;DR – The goal is to create a carless city in the game Cities : Skylines. It happens, but not like you’d expect. Blame it on the bouncy houses.

Calville has a traffic jam that stretches nearly 2 kilometers. Delivery trucks wait patiently next to sports cars. The psychodelic flashing of police cars and ambulances pepper the route like some sort of funfetti cake gone wrong. And, to top it all off, buildings are burning down while my firetrucks wait in line.

This will not do.

So, if cars are the problem, how do you solve it?

Get rid of the cars.

Now we’ll back up a bit. Calville is the name of my city in Cities Skylines, a Colossal Order title published by Paradox Interactive. When Sim City 5 flopped and burned, this game was the savior to the city building genre. Everything the once great Maxis title did wrong, Cities Skylines does very very right.

Initially in order to start a city I have a limited budget and a limited set of infrastructure. No metro lines or train depots. Instead I make a few basic boroughs, add some utilities, and paint it green and yellow and blue as each spot is zoned out. Then, with my budget about nil, I start the rat race.

The first citizens move in, then the corner grocery stores rise, and finally industry comes in to make ice cubes and apparel. Then, bit by bit, I expand outward.

During those first halcyon days I’m not putting much thought into how to make all this work when 50,000 people are living there. So what seems like a really good idea for a city of 4,000 people is a terrible flaming shit storm for a city of 40,000. (Yes, that’s you circular highway idea)

Sure I try and deal with the issues as best I can, but eventually everyone wants to use the same few roads and I get a traffic jam to make Los Angeles proud.

Which brings us to the car issue. Can I actually make a road-isolated city and have it function?

Without the metro lines this would be fairly well impossible. Actually, lemme back up, it would be quite possible but I’d need to use trams or buses. The metro is out of sight, beneath the streets and buildings, and unbelievably cheap compared to how awesome it is. In Cities Skyline the metro is fucking sexy.

So I start and layout some sidewalks, just hiking paths really. Then I discover this is all useless as I can’t zone buildings on walking paths. I need streets, the game just won’t function without it. Now this makes sense if you think of the heavy construction equipment that is abstracted in the game, it needs to make those buildings. A few minutes later and my walking path district is now lined with roads surrounded by bike paths. A single metro station is smack dab in the middle.

Then, with a swipe of the mouse, I color it all blue. The darker color denotes heavier commercial zoning. Stop thinking bodegas and ice cream parlors and instead picture Trump-esque pillars of economy and shopping. This is where the Mall of America goes to shop and hang out with Macy’s and Nieman Marcus.

A Transportation Engineer (Which I’m Not) would point out how I went from an organic city to a planned one. Go back 150 years to the age of US expansion and you’ll see these precise grids showing how the cities should grow. Compare that to say, Rome, or Paris, or Boston, which grew organically with no thought as to how railroads or cars, or highways, should be placed. Fast forward to today and no one “plans” a city growth anymore. It just grows.

And the people arrive in droves to worship at my mecca to commerce. They disembark from the metro and explode onto the street. In a few short days it goes from ghost town to boom town. Holy shit, I think, this could actually work.

Then the garbage piles up. Then the fires start. Then people start to die and we need hearses. What about that ambulance?

Ahh. So now I need to take my isolated island and add some services that will only hit this one area. Easy enough. So in short order we have all of the services we desire, plus I add a bouncy house. Because c’mon, what shopping experience is complete without a bouncy house?

Pedestrians flood forth from the metro, stroll through the streets, bicyclists roll about in my nice neat lanes and the only thing that graces the blacktop on four wheels is a service vehicle.

Then I see a fucking jeep. Then a garishly colored VW bug knockoff. What the fuck. Out of nowhere cars are materializing on the streets and going to, I should have guessed, the goddamned bouncy house. My island of automotive exclusion has vehicles spawning on the street. I’ll call that one a bug by Colossal Order. It’s not many, but they appear, drive to the bouncy house, and disappear some time later.

Now icons are flashing at me on all of the commercial buildings. Not Enough Goods. Ahh. I’d wondered how those stores were going to get the goods on the shelf. For a short while it seemed like a magic hand was just delivering it.

So now I have a problem. If I connect it to the rest of the highway system it’ll be flooded by every jackass in a motor vehicle. (Going to the bouncy house no less). That’s the issue with a carless society. How do we move pallets of potatoes, racks of Diet Coke, and you know, heavy stuff. The information superhighway doesn’t deliver a steak.

In short order a cargo terminal goes up and I link it to my export line. I already had one cargo terminal in my city, so will the goods flow? Unlike passenger trains you can’t create routes for the cargo trains. I watch, I wait, finally a train slips down the tracks!

And then trucks depart from the cargo station. Lots of trucks. Well, that was unexpected. It seems that the cargo depot is the games spawn point for a fleet of delivery trucks. This is interesting, they drop off supplies and then disappear back to the cargo terminal. They need no highway to return to wherever the game sends them to. (Are they like flying dutchmen? Doomed to forever roam a digital highway?)

This has solved an interesting problem. I can move my freight without needing a massive highway system clogged with (half of them) empty trucks. Now I have my local delivery system which can make perfect use of my dainty little two way roads.

I then add a high density residential zone onto the commerce area. Another metro goes in the center and then a few more services. Then another commercial zone. Then another metro. It’s all still working. At this point, to be honest, I’m kind of amazed.

And it’s all making sense. I mean how did I expect stores to stock shelves or restaurants to get food without some heavy movers? I’ve yet to see a cargo Segway. But what about a fleet of third world cargo bikes? Someone should mod one of those crazy bikes that they carry a thirty foot load of bananas with.

In all seriousness, it highlights an important post-automotive issue. You still need trucks. The cargo to power ratio of a bike versus a semi truck isn’t even close. But what is interesting is you could transition to an electric fleet of delivery vehicles. There’s a few startups working on garbage trucks, where driving distance isn’t a huge issue like an over the road truck would have.

But back to the city. My road-isolated districts are growing quite well. In fact the old fashioned layout of feeder roads leading to highways and such seems superfluous. A simple two lane road handles all the traffic with ease. I cut off a few more districts and make them road isolated as well. So far, knock on digital wood, it’s holding out with a pretty decent growth rate of about 500 people incoming a week. Land values are high, and we’re not running out of goods.

The cargo situation still bugs me as does the mysterious cars spawning on the road. The metro seems far too cheap compared to how good it works.Also garbage trucks and hearses seem to work strangely. There’s no traffic on the roads (virtually none), and the incinerator says only a handful of trucks are needed but the garbage still piles up. Same with dead people.

But it is very satisfying to see a high density area with a minimal amount of vehicles traveling on it. Its been one hell of an exercise in density, design, and the need for heavy transport. I’m going to keep at it and continue to grow it in these isolated boroughs.

As a car centric society it’s very interesting to make a city like this. It’s un-American. I’m basically a traffic communist not even allowing the cars to leave the borough. All you can do is drive a shitty car around a few blocks. A revolutionary delivery system would be needed to remove the trucks and heavy transit. Sure you could electrify it and then have an autonomous driver, but who unloads the semi? An autonomous forklift?

It all points to an interesting future. I’d love to be able to simulate a wide-scale ride share system. Or even autonomous cars driving about empty. For once it feels like a game where the reality of our modern transport system can be tinkered with to give an idea about the future.

Unless there’s a bouncy house involved, then people will literally drive down sidewalks to get there.