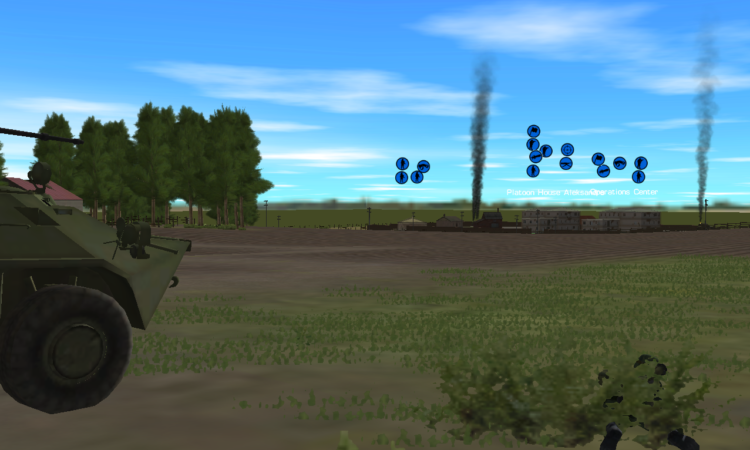 My daylight gaming lately has been spent playing a lot of Cities : Skyline with my son. When I haven’t been watching graveyards fill up, or buildings burn down, I’ve been alternating between Combat Mission : Black Sea (CMBS) and Graviteam Tactics : Mius Front (GTMF). At first what seems like two similar games, and a totally unrelated city builder, all share some interesting features, and are all also totally different. Are they a simuation, a puzzle, or a game? (Parent note, my son found it terribly funny when people catch on fire and run about like mad in GTMF so due to mom anger he doesn’t watch that one anymore)

At first glance CMBS and GTMF are very similar games. Both display squad and platoon level combat that are ordered about by the player, though not neccessarily controlled by the player. For example in both games I can order a platoon of infantry to assault a machine gun, and in both games the infantry will take casualties and then flee. Contrast this with say Starcraft, and you can order wave of wave of infantry to the meatgrinder with zero impact on morale.

Now when you play either game, interface aside, they are entirely different. It took me awhile to understand why CMBS clicked and why GTMF did not. Now it’s worth mentioning that the interface in GTMF is daunting, it does not follow the normal conventions of flow and layout that we’re used to. So initially I thought this was the issue with the game. It’s such a beautiful looking game that I struggled through to learn it. But still, it didn’t click.

A week later I was browsing a thread at Grogheads that asks “Have you played Graviteam Tactics, and if not, why?”. So I threw my two cents in and got a very interesting response.

To quote RyanE : “I think what you are touching is the difference between a game moving towards simulation (Graviteam’s) and games still with connections to board/tabltop (BFC).  BFC tried to break more of that connection with CM2 games, but it has kind of gravitated back to it over the last few updates.”

And that’s about when it clicked. The games, at the most basic level, are aiming at two different outcomes. One is a simulation of combat in the Mius Front region while the other is an attempt to break free from the constraints of a simulation and make a game.

If the Graviteam simulation isn’t fun, but it is accurate, is it still a game? If the Combat Mission game is fun, but isn’t terribly realistic, is it a simulation?

Because fun is not quantifiable, I’m not going to answer that question. (Come on, we play games with hexes and terrible graphics and consider it fun, we’re not the right people to answer this!)

But the designers both have different outlooks and trying to compare one game to the other is flawed. I now see GTMF as a simulation of a conflict on a broader scale where I see CMBS as a ground combat game with elements of a simulation.

Which brings me to one of my complaints with CMBS. The base game comes with a wide range of scenarios and these are usually noted as “played best by Blue” or “Played by Red vs AI only”. These scenarios have a string of objectives and you, the commander, must thread the needles and move troops through the battle. Now just because the map is wide open, doesn’t mean you can move anywhere. So instead you take a certain path, run into a single unit, fight it out, then continue along your way. Rinse. Repeat. Done.

So the replay value of that scenario turns into remembering where the hidden ATGM unit was, or moving in a more professional way. (More on that in another post!) So is the scenario a puzzle to be solved in one particular manner? Or is it forcing you, the player, to play it in one particular way? As I play more CMBS scenarios I think they are puzzles with maybe one or two “proper” routes. But when I play the same game in the battle generator it feels totally different. Now it feels more like a simulation.

In open battle CMBS feels more like a battle in GTMF where your forces rush to get into cover, or follow proper routes of attack, to secure a bigger objective. But when I play GTMF I miss that puzzle effect that I get from a scenario. Sometimes I want a puzzle-scenario. I want to be able to drive my tanks into the same spot and watch them tear up that other tank.

Where Combat Mission feels like moving individual pieces on a game board, Graviteam feels like an organized simulation.

So could one ever replace the other? Without significant reworks to either, I’d say no. Though I believe that if Combat Mission had the graphics and scope of Graviteam it would be the better game. Sometimes the simulation isn’t as much fun, even though it’s more realistic. Add to that the oddities that abound in the Graviteam interface and it makes the game take more than just learning the combat, but you’re fighting to learn the interface too.

But if GTMF had some more maps, an easier interface, and scenarios, it could come out on top. At the moment both games have their quirks and flaws, and neither is a perfect game. Hopefully the dev’s can make a focus on interface and usability and both games will become better for it. I’d also love to have a one minute turn mode in GTMF, it ratchets up the tension and makes for some really cinematic moments. It’s a bummer to see that amazing shot and not be able to replay it…

Now if only I could export my Cities : Skylines map and play a Graviteam or Combat Mission in it… Then export it back and have to fix it in Cities…

Next ArticleCities Skylines : No, you can't drive.