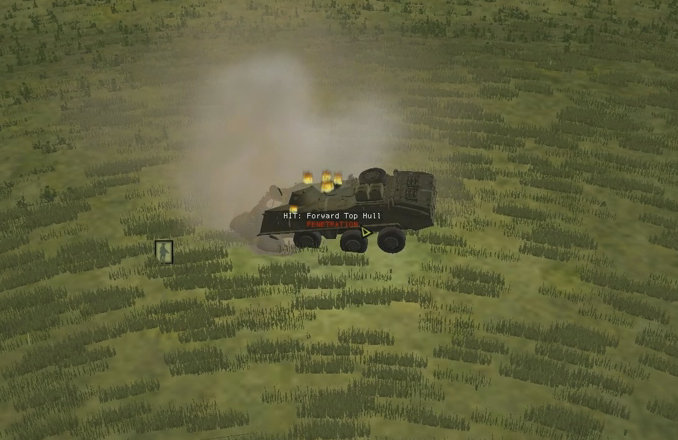 A brief recap, our entire Russian Motorized Brigade is moving into position to block an incoming NATO force. This isn’t just me and an opponent, this is a cooperative team of 20 individuals each in command of a Platoon or combat asset. On the other team is another 20 or so individuals. There’s a Brigade CO, Company Commanders, and Platoon Commanders. Some of our specialty forces, like Engineers and such, also get a commander. What’s it like? Well, like herding cats. The first turn is under our belt and we have the first kill!

If you happen to be on the NATO team, don’t watch that video!

At about 1:42 we get our first kill. A simple BTR but hey, we’ll take it! Did any more units make it across the road already though? Hopefully the keyhole fighting position has stopped a run across that road. If the NATO forces made it across they could gain a good foothold in what we’re calling Mirage Island. NATO ATGM teams are quite deadly and we don’t want them to set up and hammer us from afar.

Now this map is big. Like really big. Huge. It’s the largest CM map I’ve ever played on. Right now we have a NATO force, about our same size, hidden… somewhere. I have a hunch both sides are going to blunder into each other and violence will erupt at very close range.

So for the next few turns we’re still scrambling to get into position. Interestingly enough the weather is starting to play a big role. It’s a light rain, and we just had a T-90 get stuck. A turn later we had another T-90 get stuck in a very useless position. All we can hope for is that the NATO forces are running into similar issues.

I’ve played a few other matches like this on smaller maps and it turns into a straight up slog fest. Without room to maneuver, units stumble into each other and usually succumb to combined fire quick-like. Not much fun. We don’t have that issue here, and if I ever run a game like this myself I’ll be sure to leave plenty of room to maneuver along with plenty of space for units.

Here’s a full sized map, if you want to zoom in, just right-click and go to “Open Image in New Tab”.