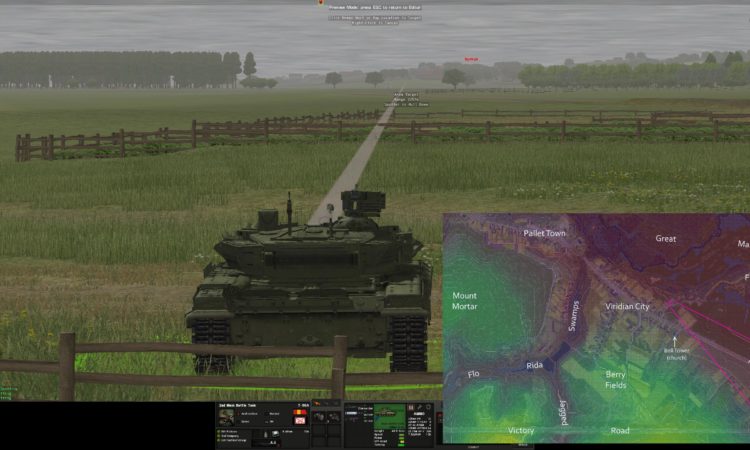 One of the greatest problems with wargames is the perfect knowledge issue. I see the entire battlefield while you also see the entire battlefield. The fog of war is, for the most part, non-existent. Card Driven Games add a new element as you may not know what abilities your opponent has or whether or not he can activate a unit. PC games are able to act as a moderator, a referee of sorts, and give you that blind issue. But still, you are (usually) an omnipotent commander who relays orders.

I recently took the position of a Platoon Commander in a double blind-refereed game of Combat Mission Black Sea. In this game each major combat asset is controlled by a separate person. Each person is in the chain of command and relays orders to subordinates. Now it’s not exactly a top-down military structure as everyone has input. The game isn’t live, or real time, turns are usually a few minutes down to a minute long. So there’s plenty of time to discuss strategies and see your own impending doom.

A possible choice of Russian reinforcements

This is the third round of this I’ve gotten into and this one is, without a doubt, the biggest. The map, Chernova Hirka, is huge. Monstrous. Almost to the point that even a modern high-end PC can barely handle a full unit count. In this case it’s a fictional engagement between Russian forces and a joint Ukrainian-US task force. The Russians have to prevent the US task force from capturing a crossroads and securing a retreat for additional forces.

The Game Map, in all its glory

One really cool part about this map, is beyond it’s size (4.6km by 3.3km) is the fact that its based on a real life location.

Combat Mission : Black Sea is a deadly game. The pace and sheer violence that modern weapons have compared to say, Combat Mission : Normandy, is staggering. At our disposal is a full modern Russian Motorized Rifle Brigade. Wipe away images of T-34’s covered in Soviets, these guys are on par with the modern US forces. It’s been so long since we’ve had to deal with thoughts of a true Russian military that it’s actually difficult to think of them as equals on the battlefield.

We have three full motorized companies with BTR-82’s, each has an attached section of T-90A tanks. Beyond that is a full support contingent with grenade launchers, AA missiles, and enough ATGM’s to choke a donkey. This entire brigade is controlled by roughly a dozen humans, platoon being the smallest unit designation with the HQ’s only handling a few vehicles and giving orders to subordinate units.

The last round I played was winter 1945, Germans versus Americans. It was actually a fairly even match and things swung back and forth before the German armor had an opportunity to knock out all of the Shermans. The previous round I played in was another Black Sea game, and it was a slaughter. A line of US Armor was attacked en-masse by a Russian formation. The Abrams, and not even the entire battalions worth, almost totally slaughtered the entire Russian unit.

I don’t think a single Abrams was lost.

The pacing is much faster in Black Sea. You go a long time until contact, but when contact is made the weapons are so precise and deadly that it might not last long. Who sees who first usually determines who wins.

Not to say this isn’t fun. Each person adds a good deal of flair to producing orders.

A deadline is set, usually a few days ahead, and each person lays out as specific of orders as they can. These orders are linked to a Google Sheet (so everyone can see them) and then the referee inputs the whole works. Orders for the company is usually just some map designations to tell the platoons where to go. The platoons get more detailed and use the in game orders such as “Have BTR-82 #1 move FAST  to the edge of the tree line and then DISMOUNT the infantry.”

The cool part about Combat Mission is it’s a WE-GO game. It’s not one team goes, then the other team, but rather both side enter in orders and then the game plays through a one minute time step. In that one minute you can’t do anything but watch. It’s exciting and terrifying all at once. Now your troops aren’t robots and will flee from fire, get tired, slow down, and generally behave as close to real troops as possible.

A good example of orders

This is an example turn from the previous round that shows how it plays out once all of the orders are in. Each side has it’s own video of the turn with the referee showing highlights from each group.

Right now a referee, the esteemed Generation Internet, must enter in each order. This is going to be like herding digital cats, especially when vague or incomplete orders have to be interpreted. It would really be awesome to see a structured program as part of Combat Mission to allow each player to log in, enter his or her own orders, then when it’s all complete on both sides to run the turn. No referee needed.

But until then we’ll need the likes of Grey Hunter or Generation Internet to lead the way and continue to organize these very fun matches.

If you’d like to watch the carnage unfold check out the Let’s Play at the forums.

For more information on Combat Mission : Black Sea, check it out at Battlefront. A little note, it’s not a bad game, but it’s much much better when played in a group setting like this.

If you happen to run one of these matches, or know of another place where they are, please let me know. I’d love to pop in and join you.