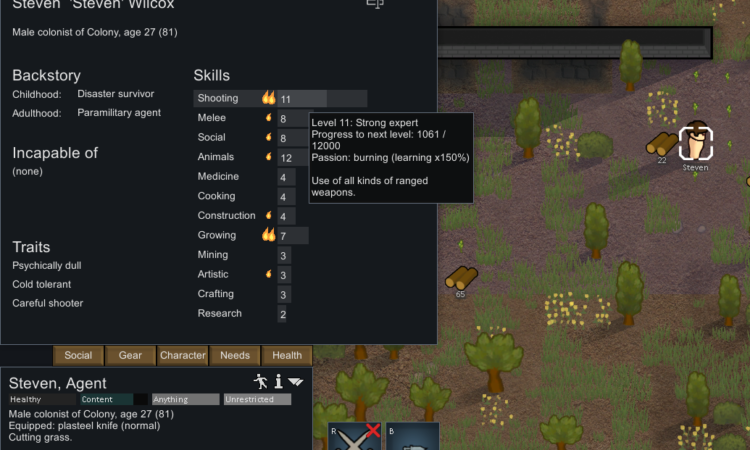 I’m a sucker for a game where I can lay the groundwork and watch the chaos run. In years past I loved making a stable SimCity and then watching as it slowly grew from one disaster to the next. The pace was nice, it was my pace, I could control the growth, and at some level, the chaos.

Rimworld lets me do this same thing. Much like Dwarf Fortress, you can reach a stable state, a place where your colony is not in immediate danger of starving to death or succumbing from those first low hurdles. And that’s where things get interesting. You see in Rimworld we have a “storyteller” AI that tosses challenges at you. On one hand it’s cool, but on a couple of occasions it felt forced.

The goal is to get past that boring phase where you have a stable, and strong, colony and toss some challenges at it. Maybe it’s a solar storm that cuts your power, or a herd of alphabeavers that will eat all the trees. It’s not just negative items either, maybe a drop pod deposits some much needed materials to give your miners a break. On a basic level it felt pretty good, like I was getting a bone here and there while also getting a bit of a challenge.

Then I ran into the bugs.

If you dig deep enough, and delve far enough, you eventually get a bug infestation. Suddenly your once safe tunnels are inhabited by a very aggressive, very dangerous, and very active hive. You can’t just wall them off either, they continue to dig. These bugs are a very serious problem to a subterranean colony. And that’s where my storyteller started to feel forced.

The first wave of colonists went in with guns a blazing. The smaller bugs fell quick enough but then a big bug emerged and absolutely destroyed us. Blood flew everywhere. The bug shrugged off rifle blasts and pistol shots. It shredded its way into my line and next thing I knew we had half a dozen colonists, dead or dying, and slowly the rest of the colonists succumbed as they tried to rescue the wounded.

Then the storyteller popped in. Suddenly a group from a nearby tribe arrived to offer some help.

How convenient! We were saved! Except they came armed with spears. The tribe made an immediate attack through my fortress and started to pummel the lone super-bug. It went about as I expected and in a short minute my colony was dead.

As they say in Dwarf Fortress, Losing is Fun!

That one event soured me on the beauty of the storyteller. On one hand I felt in control, even of my own failure, and then an AI generated rescue came in and failed. It just didn’t feel cool to me. Trying to walk that line between a scripted AI event, and then merging it with the players intentions must be tough. But sometimes I want to feel like I failed, not like the AI scripted an event that made me fail. In this case the game needed to let me die.

But all in all this was the only time an event felt forced, plastic, shallow.

Rimworld has a lot going for it, but it also could use some growth. The tech and research system is pretty bland. For a sparkling scifi world with starships and hyperdrives it feels shallow. There’s a very limited tech-tree that feels decidedly 20th century and never really draws me in to that awesome futuristic world it could be. I don’t see this as a terrible flaw, but an opportunity for growth.

And growth we do have. The game has been a steady project for Tynan Sylvester for quite some time. I was a backer years ago, and have played various iterations of the game. It’s better today than it was a year ago, much better. Which gives me confidence that in a year it’ll be in an even better place.

It’s fun. You get to watch those procedurally generated personalities shine. The family relationships is a cool touch. Then someone dies and the grief turns the survivor into a gibbering idiot that wanders about naked until they too die. Those relationships make the game interesting, these aren’t the faceless nameless automatons of Simcity. They almost seem to have souls, a digital reckoning of action and vice. They will drink. They will do drugs. They will dislike their neighbors.

It feels good to get that colony functioning. I just want more scifi, I want more depth, I want more tech, I want it to feel like an Asimov novel, or a Heinlein story. Yes, it has modding support, but I don’t want that. I want it to be an awesome scifi story generator in its vanilla phase, not with some ever changing mod. Mods are fine and all, I just dislike it when they replace what should be core functions.

Is it worth getting? Yes. It’s not vaporware, or a Kickstarter wet dream, it’s a fully functioning game with room to grow. If you like building games, watching potato people drink themselves to death, and rampaging alphabeavers, check it out.

Today we have games that grow and adapt as time goes on. It’s unfair to write a number in stone for something that is still being developed. So, I’ll do my best to encapsulate my feelings about the game in this moment. If the game grows and changes significantly then in the future it may be revisited.

Next ArticleWargames on the Table / Screen