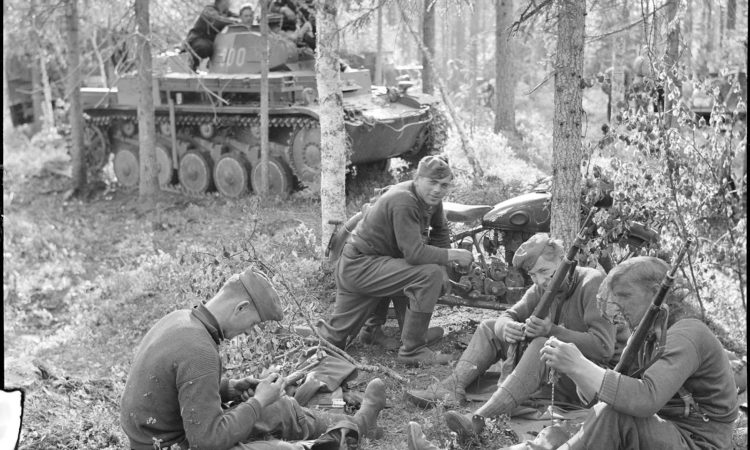 Our Panzer Summary. The biggest issue is AGN, almost out of gas. Guess who is getting some love this turn? Overall we’re doing good with repairs.

We’ve got some good decisions. The first is taking fuel from the Luftwaffe, we all know how much Goering likes me.

Always fight for the troops. This is an easy choice.

Time to start pissing off the train Nazi.

And maybe this explains why AGN is running out of fuel…

Finland! Oh how I’d like to take a sauna… This front is moving fairly slowly. Once AGN makes more progress we’ll likely see these forces pulling back.

First we’ll look at AGC. The Bialystok pocket has turned into a cauldron of death. In fact I’ve tied up too much of my infantry here, I should’ve been moving most of them East a turn ago. I’m way over-powered here. I’ve got two army groups and remnants of a panzer group. This is going to bite me later.

But… look at this.

This is satisfying. We wiped out one hell of a pile of units. The next assault finally cleared the pocket.

The rest of AGC is making great progress towards Minsk. The Panzers are going to bypass the city and let the following infantry mop it up. I’ve got a potential pocket here.

AGS is making some headway.

If we can close up with those Romanians I’ve got the potential to seal up another nice bunch. At the very least we’ve captured the rail line heading back towards those units. This is going to be another ragged line heading East. Ideally the Panzers will continue southeast and help the Romanians while my Infantry marches on Kiev.

AGN is kind of a mess. My Panzers are out of fuel, so we made a serious effort to airdrop supplies and put some focus here. Beyond that I’ve got a bunch of divisions tied up chasing ghosts up to Windau. Luckily the Soviet armies to the East of me haven’t noticed and are still pulling back. I don’t have enough forces here to make a really nice line, so the only hope is to continue North. Oddly enough I could drive suddenly South with my Panzers and link up with AGC securing myself another pocket…

But then I’m at least two more weeks back from Leningrad. But man, that’s a lot of units…

Next ArticleDo I need more Eastern Front? Conflict of Heroes : Awakening the Bear