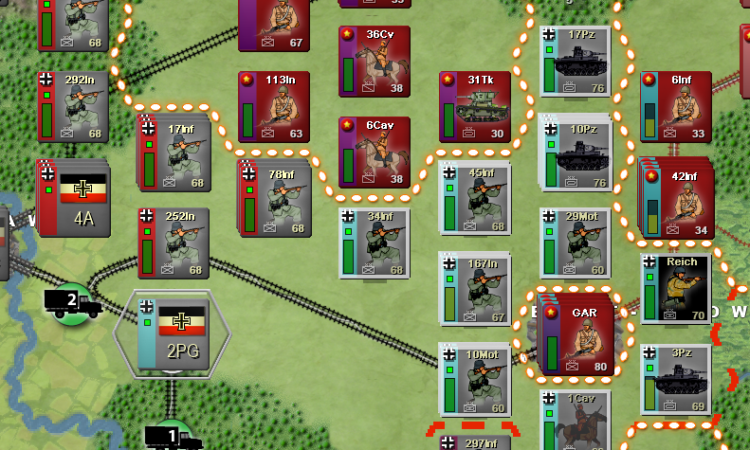 But first comes the pre-round where we make a bunch of decisions that will lay the ground work for the war. The big question, right off the bat, do I support Hitler? Having played the game and not supported him, well, it’s tougher. Much tougher. So we’ll support him and hope he doesn’t pick any dumb objectives.

This is one of those really cool parts about DC:B that sets it apart from other hex-and-counter style wargames. My choices in this opening round can really change the entire layout of the game. Do I take that Romanian Oil? Do I shift assets from one front to the next? Does the Train Nazi get what he wants? (No!) If anything I wish it was expanded more, there’s a lot of room for growth in this system.

But back to the Eastern Front….

First we have the Northern Theatre, destination Leningrad.

Then the Central Theatre, destination Moscow. They’re also bordered on one side by the marshes. First goal is Minsk and an encirclement.

And finally the Southern Theatre. The Romanians won’t activate for another turn. The bulk of my force will do a one-jawed pincer, or at least try.

And there it is. Leningrad.

The diary was added in a recent patch and adds a bit of flair. Before we just had Halder’s diary excerpts. We’ll be sending dear Hugo northwards to try and hammer his way into Leningrad. Judging by the smile on Hugo’s face he hasn’t heard the news about Leningrad.

We push for Riga.

I wish I could say it was a sophisticated blend of tactics and strategy. But I use the infantry divisions to punch a hole and then drive the Panzers through. For now the goal is to reach far, strike fast, and hopefully knock the Russians back before they can form a solid line. I’m fighting the clock, my Panzers will need rest so I want to punch as long as I can.

And then I forget to make my decisions for the round. Doh. I spend some political points to get more Oil and keep the Luftwaffe at it for a few more days.

We form a nice pocket around Brest-Litovsk and start the Southern pincer around the Bialystok pocket too. The 4th Army moves forward and holds, we’re going to use them for mop up. It seems I forgot to snap a good photo of the conclusion of that pocket but we damn well seal it up from the North too.

We start the southern pocket without quite as much fanfare. There’s a good ball of Soviets here who make a tough bulwark. Our Panzer divisions make some headway but this’ll be a tough pocket.

Full size this thumbnail and you’ll see the disposition of the entire front. The South looks like crap and I don’t have a perfect pocket in the center. Even the North could look better. Oh well, it’s a start!

Panzer groups are all looking good.

The diary today reminds us that this is not a nice place to be. At times it’s easy to forget that those counters and hexes represent the fates of millions of lives. The sheer scale of it makes that easy to forget. Adding the diary entries helps to cement the reality here.

And that concludes the first turn. The next entry will see us off on turns 2 and 3. The big goal is to finish the central pocket and maybe even take Riga.

Check out the next turn here : Turn 2!