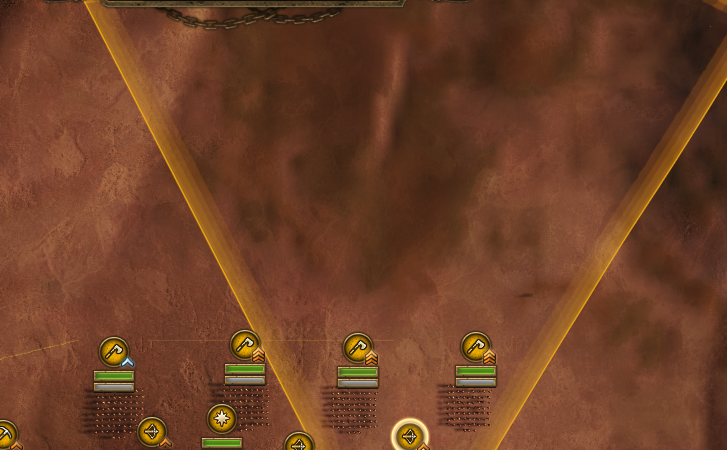 Total War : Warhammer drops you into a realm of magical and martial violence without much of a tutorial on how these units actually fight. That Orc warband should be easy, those undead should die, hell, the little orange bar says so. Then, lo-and-behold you get stomped.

Well we’ve got some options. Lets go over the hows and the whys of using your formations.

Welcome to the checkerboard.

Our goal is to use our core infantry units as the anchor while our supporting units rain down arrows, charges, or magic. These anchor units have one purpose in life and that’s to hold down the opponents army so you can use your value added units to your advantage. In the case of the Dwarves, you can stick the High King nearby and have a wall of nearly unbreakable infantry that will keep the opponent tied down.

1/6/17 Edit : Zerkovich has a really great video tutorial to reinforce some of this, check it out!

It’s not enough to give a solid front though. This is a generic opening line. Notice the ranged units out front with a line behind? You get the most out of your Ranged units until the combat begins then they end up as a minor supporting role once you pull them back. Depending on the hills, terrain, and friendly units, they might not be able to add much firepower. This is bad. Those units are force multipliers and without them you have a big part of your army doing nothing.

So now we take a lesson from Rome. Not Total War : Rome, but the Roman military and how they laid out their units. Instead of a tight block of forces we will instead open up into a staggered checkerboard pattern. Initially you’d think this would make the formation weaker but we get a few bonuses.

Our front line has gaps. That’s OK, no hostile formation is going to waltz through there. These gaps allow our ranged units to continue to fire into the flanks of the attacking enemy ranks. Further back (and on a hill) we have our cannons. They too can fire over the heads of our archers and also into some of those same gaps. You could continue this by adding more units staggering another rank back.

Here’s a better photo of our firing arcs. Each of our crossbows can cover at least one unit of Dwarf Warriors. What will end up happening is the hostile army will try and flank you with cavalry and disrupt your archers and cannons. The miners are in place to engage those forces and allow the archers to focus fire until the flanking units are gone.

One other tip is to make a group out of your front line. Select the units and press the G key. Then Alt-Right Click on the enemy line. Now you can hit a number and select just those units, but best of all they’ll remain in formation when moved. Once the front lines are engaged you focus your attention on micro-managing your own cavalry and magic, or in the case of our dwarves here, you focus on managing the crossbows and cannons.

Here’s another view showing just one unit. Not too bad for coverage eh?

This army was pretty small as I didn’t want the overlaid arcs to get too messy. Ideally you’d have more melee units to give a strong screen. Or some more miners to cover the flanks of the archers. This scales up as well, just play with the spacing and add another row to the checkerboard. There are other variations as well that the Romans already figured out way back when. It’s really worth reading the Wikipedia article on Formations.

Graviteam Tactics : How to Use Artillery

Rome to Charlemagne : A Different Wargame