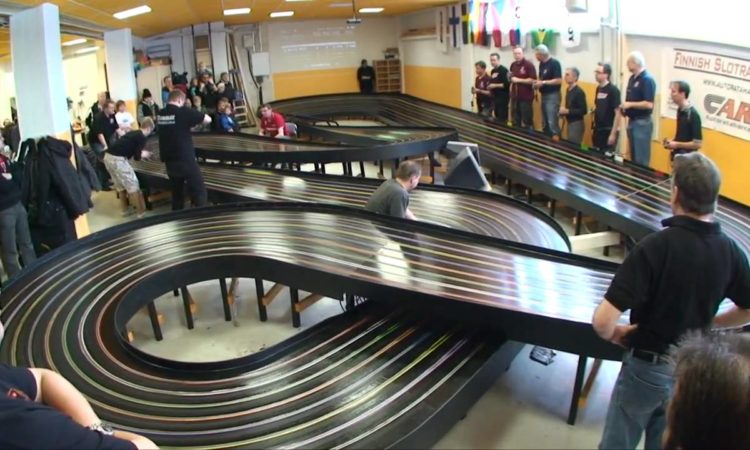 The track is a monstrosity, each section is roughly three foot by three foot, dense MDF, routered lines and copper wires. At each joint is a meticulous melding of wood and slots. I’m staring at the largest slot car racing track I’ve ever seen. Sweat pours off of us as each piece is carefully positioned into a basement. The man overseeing it all, John, is in his early 60’s, a bit plump, and man, he’s really into slot cars.

I’m, well, not. We work side by side for hours but never really seem to click. This guy is into his slot cars, like REALLY into them. So after awhile we talk about the disconnect. Why am I not into them?

Let’s back up a bit. The 1960’s were the heyday of slot cars. Preformed plastic tracks allowed hot rods to zip around an electric track. You could spend hours watching those cars race about. Tracks were customizable and the kids with the biggest tracks could have the most exciting races. Even in the 1970’s they were still a primo toy, but as it is with toys, the luster wore away and those who played with them moved on.

Except they didn’t. They just got older and now my father purchased a ridiculously sized wooden race track. The damn thing is nearly 20 feet wide by 30 feet. It’s big. It’s really unlike anything I’ve ever seen. But I understand it. Just like I’m into computer wargames and strategy games, he’s into this. I’m not, but I still know how he feels. The same way I do when I fire up an old PC game, or bite into a new one.

John tells me of his latest trip to Japan, downtown Tokyo, where he installed an even bigger track on the top floor of one of the tallest buildings in town. The proud owner is the CEO of one of the largest Japanese Corporations. That evening for the inaugural run the CEO invites the CEO of the 2nd largest corporation in Japan. Both of these men are avid slot car racers and both well within their 60’s.

The frugality of youth is gone and the nostalgia comes with a heavy price. This is a niche, and a very particular one at that.

Hex and counter peaked in the 1970’s and 1980’s and soon after the first era of PC Wargames came onto the scene. Some were just reboots of the boardgames, other tread new ground. But still, to this day, we see Normandy’s, the Battle of the Bulge, and the Eastern Front. Or, more unfortunately, we see different scenarios with the same game engine. This is rather like painting the racetrack red and calling it the Brickyard 500.

But at the same time we see some amazing innovation. The COIN games from GMT is one prime example of a totally new type of very grognardy wargame. Then we see things like Gary Grigsby’s War in the East, the logical evolution of the never ending quest to continue adding complexity to wargames. Then something comes along like Decisive Campaigns : Barbarossa with it’s political simulations or Rule the Waves. New ground is being broken, the niche is expanding, and even a title like Total War : Warhammer has it’s roots in hex and counter.

Then we see more games that are like the old. Recently a lackluster and piss-poor looking ASL simulator came out. Or even worse the reboot of Master of Orion. Or Gal Civ 3, same thing, a rehash of an old game with nothing new added. Then along comes something like Stellaris and we see an entirely new way to do it. Stellaris has some issues, but the DLC for Life model is likely to address them better than Gal Civ 3 will.

So what is it then for wargames? Is it a slow death as an expensive niche like our slot-track racing friends or a path to new growth? In our case there isn’t a single track to failure. (Yes, that was a subliminal tie in to slot car racing)

We have multiple paths and a convergence of niches. Sure the hex and counter folks are going to clip counters and combine maps, but tools like VASSAL allow you to actually play against another human being. On the PC side you have a plethora of really great wargames, more than ever, and some breaking ground at a fair price. At the same time you have lots of clones of old games with sub-par graphics at niche pricing.

Is there a certain tie in to the past that makes us more likely to pay a premium for that nostalgia? I think so, I really do. Look at Matrix or Battlefront or the Tiller games. All have games that are bad designs with bad UI’s and bad AI’s that sell just because they evoke a certain sense of the past. Not all of those game distributors are guilty of it, but they have a fair share of turds.

But here’s the thing, once those who can pay a premium for that nostalgia are gone the niche is empty. You see this with Classic Car values. At one time Model A’s and Model T’s commanded top dollar and then it dropped off. Then the same thing happened with 1950’s Chevy’s and Fords. They peaked, those who remembered them have gotten older, passed away, and now the value drops. Today the value of 1970’s muscle cars is the primo market. But eventually the same thing will happen.

Slot car racing will fundamentally die in twenty years. Sure, some people might still fire up a track, but the bulk of the mass of players will age beyond the point where they still play. The same thing might happen (is already happening?) with the monstrous table top war games. How often are games like Case Blue played? According to BoardGameGeek, one play was logged in the last thirty days.

The niche for war games, be it computer or tabletop is strong today. We have more options then ever, more good options. On the tabletop side there is an amazing revolution happening in board games. Each day gives us a new Kickstarter for a new amazing looking game. Sometimes they play well, sometimes they don’t, but it’s all getting honed. The same for wargames to a lesser degree. Old School Tactical showed some really amazing artwork and game play and after a year and a half is finally getting shipped.

Games Workshop, the maker of Warhammer and the likes, are spreading their IP to all sorts of great (and not so great) games. Fantasy wargames might bring in the kiddos, but eventually it leads to other, digital grounds. Just like the slot car racing folks, the younger gamers stick to their sphere. PC gaming. Some might venture into hex and counter land, but it’s a hell of a lot easier to play the AI or someone via PBEM or multiplayer. I have enough shelf queen games to know that what looks cool on BoardGameGeek doesn’t get played if I can’t find an opponent.

So how do you grow a niche? By making titles that expand the niche, grow it into new places, by trying new things. Do you think the guy at Rule the Waves ever thought he’d get the reception he did? Or that DC : Barbarossa would get the universal praise for a fairly standard looking hex and counter game? Right now we have YouTube and Twitch expanding what games you can watch entertaining folks play, and sometimes it’s more fun to watch someone else squirm in a game then to do it yourself. Take a really compelling forum AAR and spice it up with good editing and an eye for action and man, you’ve got a winner.

Do we need another Close Combat game, or Starcraft in Russia ’43? No, we need a grognard Paper’s Please or polished Rule the Waves. We need a mash-up of Combat Mission and Graviteam Tactics (both of which are much more fun to watch than play). We need engaging naval sims, and games that draw people in.

If we remain on the track of nostalgia, no matter how good it feels, the niche itself will close up and eventually reach a dead end. By expanding the niche we bring in more people, which offers more opportunities, and most of all, we have more fun doing it.