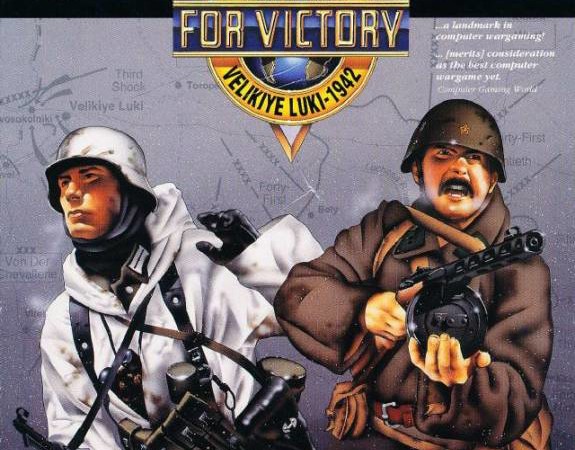 There’s rose covered glasses, and then there’s DOS emulated screens. Memories tend be an odd thing, especially very fond memories of video games past. As we grow, and the games we’ve played grow, how do the old ones stack up?

One of the first war games I ever recall playing was V for Victory : Velikiye Luki. I was probably about 14 years old at the time and had no concept of the history behind the game. For me the Germans were some sort of parody from Hogans Heroes and the Russians just a generic bad guy. But man, I sunk some time into those scenarios.

V for Victory Velikiye Luki was released in 1993 and developed by Atomic Games. It’s part of a series of games stretching from D-Day all the way to Market Garden. Eventually Atomic Games went on to develop the Close Combat series. Unfortunately I’m not sure if the studio is active anymore, there’s no updates on the website since 2009. They look to be a branch of Konami, so who knows what they do now.

This was a big year for the Eastern Front as Gary Grigsby also released the second iteration of Russia at War in 1993.

V for Victory though took a much smaller scale of game. Instead of the sweeping expanse of Russia we have the area around the city of Velikiye Luki around late November 1942. The game gives you unit control, but also allows you to delegate, in some cases damn near everything. In addition you can delegate air strikes, artillery, and even supply, should you desire.

The game is broken into three phases. Planning, where you get to issue orders, Execution, where it all happens, and the AAR phase.

In planning you give individual units orders kind of like you’d expect. There’s a variety of move styles and combat styles. Probe, Assault, All out Assault, etc. Certain units can dig in and add a defensive bonus.

At first glance the game looks really simplistic. A dozen or so units on both sides, a small area, some decent terrain variety. But man, it escalates quickly once you try to start taking ground or holding out against a determined artillery barrage.

On my first move I sent out a combined arms force of infantry, AT guns, and an armored company. Oh, and they had some mobile flak too. We moved quickly across half the map and hammered a Soviet HQ. And then things got rather hairy. Soviet aircraft hammered our position and suddenly that company of tanks and AT guns were gone. Poof. Eradicated.

The only benefit we had was that the retreating Soviet forces also came under air interdiction as they tried to flee. I rather wish our air force had protected the panzers instead of hunting fleeing infantry.

The simplicity doesn’t hamper the game at all. If anything we’re not lost in detail and charts. Attack, defense, and movement are all pretty simple. How that’s abstracted with supply and weather is out of sight. This isn’t necessarily a bad thing. Just because I know a unit has 800 K98 rifles doesn’t mean I’m a better player for it. Too often games get bogged down in a level of detail that’s not relevant. Look at Unity of Command, sure you can’t model how many rations the 4th Panzer Army had, but it’s a fun game.

The interface is rather clunky, about what you’d expect for something that would run on Windows 3.1. But even with the slow pace of click, move, go, it actually flows pretty well. There’s some modern games that don’t flow as well as this game does.

And this game is fun, at least if you’re into that sort of thing. Yes, it has hexes. Yes, it’s clunky and kind of slow. Yes, you may not have any idea what the hells going on because no one has the manual. Strangely enough it’s OK. The scenarios are short and you get a high dose of grognard in half an hour.

Want to try your hand at it? It’s available at MyAbandonWare. The best part, you can play it right in your browser without downloading any emulators or crazy 1993 drivers. You have to select the v4v.exe in the executable drop down and away you go!

My ideal dream for this game would be for someone to port it to iOS. It’s simple enough, small enough in scale, yet rich enough to make a good handheld game.

Well worth a try, and it really has aged well. If the graphics were up to todays snuff I think it could stand alongside many of the modern wargames.