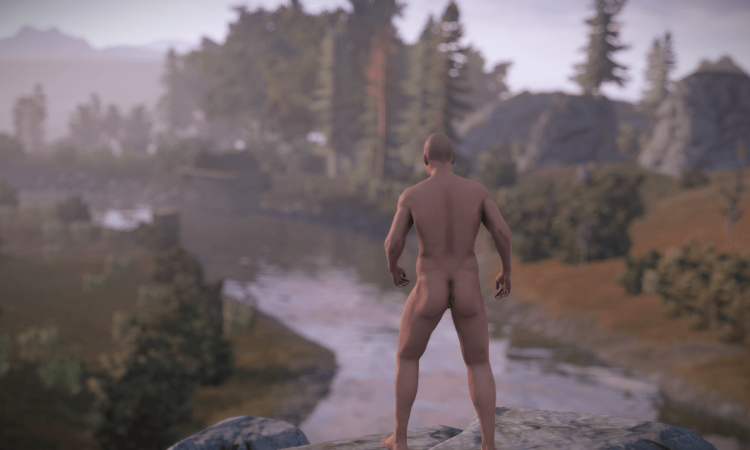 I regain consciousness on the sandy shores of some distant beach. Waves lap gently against the shore like some long lost summer vacation. It takes me a moment but finally I get up. The sea stretches out beyond me. Turning about I get my first shock.

Naked men. Lots of them. This beach has more sausage than Oktoberfest. Behind them is a hill, rocks, forests, some strange looking fortresses rise up, and what could be a distant satellite dish.

Where the hell am I?

I’m on an official server where the only rules seem to be “Don’t be a dick.”

Well, there definitely a dick swinging in the wind. And it’s me, in more than one way. In most games you are dumped into a rather safe zone. A place where you can gather your wits, press some buttons, and generally make yourself comfortable.

That’s enough welcome for me. I set off towards the hill with a few other naked men running with me.

Then comes the voices.

“Herp!” The voice is that of an older man. I can hear a rasp like he’s got a cigarette stuck onto a chapped lip.

“Derp!” A second voice replies, this one much younger. Derp has an axe. Herp carries a climbing pick.

It’s terrifying. They keep shouting it out. One of the naked guys with me stops only to be bludgeoned to death. The tempo springs up. Herp Derp. Herp Derp.

I’m nude, no weapons other than a rock, and I’m being chased by two naked guys whos vocubulary is nothing but an internet meme. There’s no reason here. I don’t have anything. There’s nothing to steal.

I keep running. I decide to wield that big rock as a weapon. Now I’m carrying something that looks like a cheap tumbled stone block from Walmart. You know, from the clearance bin outside the flower area. Is it a good weapon? It certainly doesn’t look like it.

A few sets of stunted bushes give me some cover. Shit, not really, they gave someone with a gun cover. I’m bleeding just a tiny bit. Some fucker shot me!

I sprint faster, hopefully away from the bullets. A terrifying scream rises up from just before me. It sounds like a man is being flayed alive.

What the fuck. Oh shit.

Keep running. When do I actually build a cabin, or you know, hit a tree with my rock? All I’m doing is trying to escape from a strange world of naked men and comical weapons. I’m a complete and total outsider here. Not only do I have no idea what’s going on, but for some reason it feels right. Like this should be what happens when you awaken naked on a beach.

A man, this one in brown clothing and a blue bucket on his head, steps out from behind a bush. He too has a weapon. It’s pointed right at me.

Then he asks. “Are you Russian?”

The man turns away from me and crouches. Is this my savior? My introduction to the game? A sage who will point me in the right direction so I can finally build that wicked fortress?

I don’t know what to say really. I’ve seen this mindset with the Chinese in other games. Or even the Koreans on occasion. It seems the Russians have a bad reputation in Rust.

My Obi Wan sets off without another word. This is the first interaction that’s gone well. So I follow him. I mean c’mon, the dude is wearing clothes. He’s obviously doing something right.

We zig and zig through bushes and trees. I have no clue where I’m going. And it doesn’t seem like Old Ben does either. Every so often I hear him call out, “Russian?” but I’m back far enough I don’t hear the response.

Until suddenly I do.

Some slavic language comes out of nowhere. Obi Wan is cut down by a single man faster than I can toss him a lightsaber. The Russian says something but since I don’t speak Russian I decide to go back to running. I’m hit again. I can see my blood, my little health meter is dropping.

A hill! Run! Get over it! More gun shots behind me. I leap off.

Water stretches below me. A thin spit of sandy beach cushions my fall.

I back up into the shadow of a giant boulder and crouch down. The Russian is yelling something that sounds very angry. Then finally it’s silent.

I take stock. I’m low on health. Low on food. Low on water. And I’m still on that fucking beach.

So I decide to work my way down the other side of the beach and hope to get into cover. It can’t be far right?

As soon as I step out I hear them.

I came into this expecting a PvP minecraft. Something akin to H1Z1 without the zombies. Maybe there was a strategy angle here, resource management, the will to survive and thrive. What I found was something completely unlike any other game I’d ever played. It’s strangely entertaining and at the same time un-nerving. I don’t have enough time in the game for a solid review, so for now I’ll share some experiences.

Get Rust on Steam. It’s still in development so take all of this with a grain of salt.