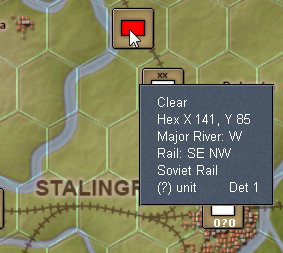 Fog of War obscures the true nature of the battlefield. Instead of an all seeing birds eye view you instead must rely on your Air Reconnaissance, unit intelligence, and gut feeling, to determine what is really happening. This is an effort to replicate what a Commander would have to work with on the ground.

The bummer here is it makes the movement requirements rather tedious as you can’t simply path it out and go, you must move each hex.

The mechanic the game uses to control the level of information is the Detection Level, or DL. This doesn’t just change what you, the player see, but how combat effective your troops are. If they have better intelligence they can fight more effectively. Imagine suddenly realizing that the unit you just attacked is filled with Tiger tanks!

If your DL is good enough you’ll also be able to see Soft Factors, the little green triangle in the upper right hand corner. Now you can judge how well supplied, or how good the morale is, of an enemy unit.

The detection level is displayed when you hover your mouse over a hostile unit. We have a detection level of 9 on the 162nd Rifle Division. You are likely to have better intel on units you are in contact with. And this only gets better with time.

Blank unit counter, unless an airbase.

Unit type will be displayed

Unit name, Unit size, and CV will be displayed. Enemy units that start a turn will have a minimum DL of 5. At this level you’ll also determine if it is a special unit. (Guards, SS etc.)

Soft factors can be observed.

We, the player, don’t gain more information by having a DL of 9, but the unit on the ground is more combat effective.

Sometimes you’ll see a question mark on a unit instead of the equals sign. This is a stack of units, some of which you have a DL of at least 5 but also some units with a DL below 5.
Now if the DL is less than 5 then you don’t get to see any CV values. If the top unit in a stack has a DL of 1 or 2 a blank unit box will come up again.

In order to see the Fort level you need a unit adjacent to that hex or a DL of at least three.

The best way to get a big picture view is to use your Air Recon mode. Press F5 and then right click where you want you reconnaissance aircraft to go. My personal preference is to use the AI to run these missions. If in Air Recon mode just press the a key.

Air Recon won’t give you a great DL. That depends on terrain, weather, morale, along with many other factors. But usually you can see a stack, maybe tell if there’s tanks, and get a general feel of the hostile territory. Come blizzard season don’t expect your air units to be worth a whole lot though.

The DL system works pretty well to mimic the actual fog of war, especially how it ties into unit combat. This is one of the better approximations I’ve seen, and it offers the player just enough information to be useful.

Next ArticleWar in the East : Supply Basics