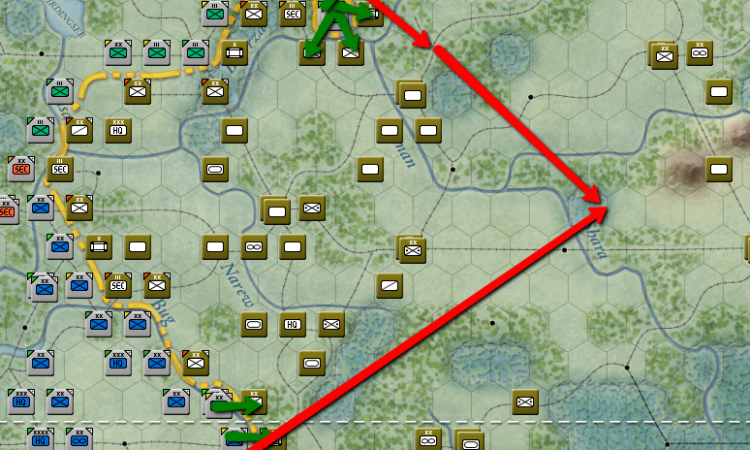 Encirclement is the most basic, and essential, tactic that the Axis armies have at the start of the game. Essentially you are using your fast mechanized and armor divisions to cut off the supply from less maneuverable pockets of Soviet troops. Without supplies they will surrender, saving tens of thousands of your own troops. As the Axis it is essential. As the Soviets, it’s essential to know how it works.

This is turn #1 from the scenario Road to Minsk. This should have been the tutorial scenario. It’s exciting. It’s simple to play. It’s difficult to master. Of all the scenarios this one offers a quick fix. You can try things, see your mistakes early, and try again.

First step is to open a hole with your Infantry Divisions. Your Panzers and Mechanized divisions shouldn’t do any attacking unless absolutely necessary.

We’ll do two opening attacks with our infantry. One in the North with units from the VIII Corps. The 28th Infantry, 8th Infantry, 161st Infantry and the 256th Infantry (XX Corps). Now we’ve got a few routes, we can go West of the Sbara River, but I’m going to aim to the East of it and try to encircle some more units.

In the South we’ll use members of the XXXXIII Corps, the 131st, 134th, and the 167th from the XXXXVII Panzer Corps.

In the North we’ll sweep two fortified units, the 68th Fortified and the 48th. But first we’ll push the 128th Rifle Division back. Note the 2=8. That means they have a combat value of 2, and a defense value of 8. We’re going to want to hit them with a deliberate attack (hold down shift and right click).

So why are we sweeping three units back and not two, or one? If you punch a hole one hex wide the units passing through are in contact with the enemy on the way through. This significantly slows them down (costs MP). If we can open that hole up then we can save 10 or 15 MP, which in open terrain like we have here, is a long way.

We’re doing the same thing down South. The SEC unit, the 17th NKVD, is a minor defense. They’ll go back easy. It’ll be helpful to move another unit up to help out with the 49th Rifle Division, they have a CV of 3, but a defensive value of 13.

Now I’d also recommend pocketing up Brest Litovsk as well. The city is well defended with a defensive value of 68. While we can likely poke a hole through it, it’s better to leave it be for now and let them run out of supplies.

There we go! The 128th Rifle Division routed and is thrown back. This is good, but ideally we trap a unit and make it surrender. Eventually the 6,000 or so soldiers in that unit will reform and return to fight another day. Bad news for the Germans.

The Fortified Regions surrender, they’re static units and can’t move anywhere. Notice the losses, 3,586 out of 4,786.

The screen looks different now too, I’ve turned on “Toggle Enemy Hexes” (the e key) and “Toggle Fort Levels” (the f key). These will show you what is enemy controlled, and let you know how fortified an enemy might be.

The South is open now too. This time the NKVD was routed, the Fortified Sector surrendered, and the 49th Rifle retreated. This isn’t ideal, as they were only pushed back one hex. But it’s OK, as we’ve still got a great path ahead.

Now we’ll do a staggered move with our mechanized units. They have 50 MP each. We’re going to move the unit furthest from the front first. Then the next closest, and the next closest. This will allow our closest units to go as far as possible while those further back hold the pathway.

The game will draw out the most efficient path. We will cross two rivers and move across three railroad lines. This is going to cut those units off from the East. The following mechanized units will all run along that same line. The goal is to keep the Soviets from escaping East while preventing them from getting supplies. Now we have to balance this and keep some of our Panzers moving East. We have objectives to capture in Mogilev, Zhlobin, and Vitebsk.

Here we have our units strung out into the pincer movement. The furthest point for that movement is the town of Baronivichi. This could be better, we could be tighter, we could breakdown our units into regiments, but for the basics this is pretty good.

Note that I didn’t attack with any of my other Infantry units that are on the West side of the pocket. We want to minimize our casualties, fatigue, and maximize supplies. These Infantry Divisions will be the vice that we use to crush that pocket.

I’ll end my turn and let the Soviets react.

If a unit is ever Red, it’s bad. In this case I selected “Toggles Units Isolated, far from railhead” or shift-o. Now we can see that the entire pocket is no longer in supply. It’s not guaranteed that the hostiles will surrender, but the chances are much better. The longer they go without supplies, the less movement points they get, the more fatigue, and eventually will become totally combat ineffective.

This one single battle shows the power of encirclement.
Brest Litovsk surrendered.

Finally we have a cleared pocket. The infantry swept up. I left the armor in place to block any movement. I’ll move them up to the next objectives once the pocket is clear.

It’s not without risk. Get too far ahead and suddenly the Soviets can spring a trap for you! Now your precious Panzer Divisions, and they are precious, will have the same thing done to them. The Soviet player must be clever, drawing, waiting, and then pouncing when the Germans are stretched too thin.

After a few winters the Germans will be stretched to the breaking point, the only chance they have to win is to remove the one thing the Soviets need.

Next ArticleWar in the East : Fog of War Basics